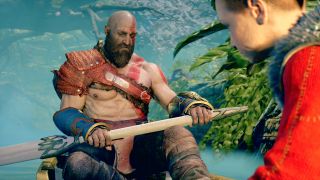 God of War director Cory Barlog would like to see the series adapted for Netflix, but says he's got nothing more than "hopes and dreams" to share for the moment.

Barlog expressed his confidence in a God of War Netflix series in the wake of the wildly successful Witcher series. He was also quick to clarify that his tweet wasn't an indication of an impending announcement, writing, "BTW This is not a hint or anything. I just believe that games would make great TV shows because you spend so much time with the characters in fantastic worlds."

Nonetheless, Twitter users were quick to fill the space with suggestions on how and how not to handle the hypothetical God of War Netflix adaptation. One @Begaria pleaded to Barlog not to make a God of War movie in light of the Uncharted movie… situation, but it turns out Barlog's a half-glass-full kind of guy. "A well made movie can be great. We have had a tough time cracking that particular code but I don't think it will be long before someone does it. It's all in the execution, I think," he replied.

Sadly, the director has yet to float ideas for which actors might fill the very large shoes of Kratos and his son, Atreus. But that didn't stop tweeter (and Emmy award-winning animator) Rob Cabrera from fantasizing.

2018's God of War has very much remained in the conversation since release for its outstanding visuals and engaging combat, but primarily for its empathetic characters and beautifully-told story. Done right, there's no doubt a multi-part series could explore the father-son relationship at its core in new and meaningful ways.

For now though, here are the 30 best TV shows on Netflix for your binging pleasure.