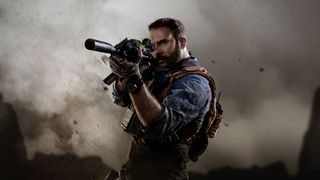 Call of Duty: Modern Warfare is being pitched as a soft reboot by developer Infinity Ward, so while it may appear in keeping with the style and feel of the original trilogy, its story will play out completely differently. In the same fashion, characters you know and love won't be the same anymore, as evidenced by Captain Price's new actor, Barry Sloane, who's take on the iconic commando channels his essence while bringing a fresh interpretation at the same time.

That said, Price won't be the only returning character to this rewired take on Modern Warfare, as Infinity Ward has now confirmed a number of "familiar faces" will be making their appearances in the game, though this could just be in the form of multiplayer avatars.

Having already revealed that previous Modern Warfare protagonist John 'Soap' McTavish would be returning to the reboot, Studio Narrative Director Taylor Kurosaki was recently asked over Twitter whether Price and Soap would be accompanied by more recognisable characters from the series. His response, "yup", is short, sweet, and annoyingly vague, but teases that the likes of Ghost, Nikolai, and perhaps even MacMillan will be making their long awaited comeback for this year's instalment of Call of Duty.

Interestingly enough, if you head over to Amazon right now to check out MacFarlane's upcoming lineup of new Call of Duty figurines, one product next to Captain Price is curiously blacked out, alongside the ominous "To Be Announced" text. Could a big reveal be imminent and, if so, who's standing behind the curtain? Perhaps we'll have to just play Modern Warfare's campaign for ourselves before we reacquaint with some of the series' most beloved fan favourites, and it's not long to wait now either. The game is out on October 25 for PC, PS4, and Xbox One.

For more, check out over five minutes of Call of Duty: Modern Warfare multiplayer gameplay, or watch our Release Radar video below for a guide to everything else out this week.