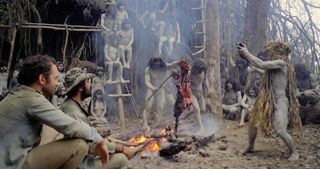 On February 7, 1980, Cannibal Holocaust had its petrifying premiere in Milan. Four years later, the movie was banned in the US, Australia, Norway, Singapore, and many more countries. So startling was the Italien horror about a rescue mission set in the Amazonian rain forest, that it was banned in the UK until 2001.

With a name like Cannibal Holocaust, you don't exactly expect a cartoon about bouncing bunnies. And yet, the list of taboos broken by this delinquent of debauchery is surprisingly extensive; there's graphic sex, brutal murder, and real animal cruelty. “There is a reaction to violence in my films but no reaction to the terrifying violence happening out there every day,” director Ruggero Deodato told StarBurst magazine in 2011.

Of course, the world has moved on since 1980. What was once scandalous to put on screen has become commonplace in independent cinema. Audiences have become somewhat desensitised to sex and violence – just look at how we celebrate the filmography Quentin Tarantino, master of beautiful bloodshed. The question is, then, has Cannibal Holocaust finally lost its ability to shock 40 years on?

Let's first look at the way sex is depicted. The movie – which sees an anthropologist attempt to rescue a film crew who have gone missing while filming cannibal tribes – features many grim moments, including a particularly intense rape scene and a pretty convincing castration. Today, though, Game Of Thrones – with its multiple instances of incest, rape, and mutilation – has become one of the biggest shows ever to grace TV screens. Even before Cannibal Holocaust rolled into cinemas, audiences had already seen The 120 Days of Sodom, released five years earlier. The sexual content of Cannibal Holocaust, though, was overshadowed by everything else going on in the movie.

The violence, in particular, caused controversy. Deodato doesn't cut away from grim acts, forcing the viewer to endure each agonising moment. For instance, near the beginning, we see a woman in the distance being raped and bludgeoned to death, while the movie's most famous still is of a tribeswoman impaled on a spike (achieved by sitting on a bicycle seat whilst holding a piece of wood in her mouth). As a result, Italian authorities seized prints of the movie after its release, and Deodato landed a variety of snuff film charges. There were even accusations that the deaths in the movies were real, leading to Deodato being put on trial; the director was forced to bring in his cast to prove that none of them had, in fact, perished during filming.

There's no denying that Cannibal Holocaust remains a difficult watch, and the realism of these scenes hold up. But, in 2020, we expect realism in our movies. Everything from the brutal bludgeoning at the end of Heavenly Creatures, to the convulsing agony of John Coffey in The Green Mile – these scenes are on-par with some of Cannibal Holocaust’s heaviest moments. They are perhaps not as brutal, but they are certainly as real. For brutality, you only need look at the ongoing Saw franchise, or perhaps the last moments Tarantino's most recent work, Once Upon a Time... in Hollywood.

Why, though, were the courts holding Deodato for making snuff, when I Spit on Your Grave director Meir Zarchi was not? The main factor was its unprecedented use of found-footage. Cannibal Holocaust is often credited with inventing the genre as it features the missing film crews' terrifying tapes being played back on screen. The results are alarmingly credible, and the movie within a movie – for cinemagoers who were yet to see Blair Witch and REC – could have been mistaken for actual documentary footage (it's no surprise that Deodato took influence from Paolo Cavara's documentaries). As Lloyd Kaufman, director of The Toxic Avenger, explained in his review: "[The] mixture of real and staged violence, combined with the handheld camerawork and the rough, unedited quality of the second half of the movie, is certainly enough to convince someone that what they are watching is real."

Deodato went above and beyond to cement the movie's realism. He wanted "young actors who hadn’t been in films and were unknown [and] had them sign a contract that said they must disappear for a year after the film was finished.” It's an impressive commitment to the art – and helps you understand why the Italian courts may have been suspicious. Today, viewers are more discerning. We know Katie's not actually being dragged across the room in Paranormal Activity. Showing Cannibal Holocaust to an audience who knows what "found-footage" is today is not going to have the same response.

However, although the graphic violence against humans may no longer be shocking, the animal cruelty in Cannibal Holocaust remains just as controversial. During the movie's runtime, we see the brutal deaths of a coati, a turtle, a tarantula, a boa constrictor, a squirrel monkey, and a pig. Worst of all, a second monkey was killed so they could get a take from an alternate angle

Deodato seems conflicted by the incident, saying, on the one hand, that people “don’t make the connection between the food on the table that mummy has cooked from the supermarket, and the fact the animal has actually been killed”. On the other, he condemns his own actions by saying he was “stupid to involve animals”. Whichever way Deodato really falls, many of these scenes have been edited out of the DVD release, yet still some remain. The most sickening scene comes when a turtle is beheaded, disembowelled, and eaten. It doesn’t matter if it's 1980 or 2020 – there are few people who can sit through the unflinching five minutes of agony.

The one element of Cannibal Holocaust that no amount of editing can fix is the alleged mistreatment of the cast. The indigenous peoples who appear in the movie went completely unpaid for their (often dangerous) work, leading to claims of exploitation. Many of the actors involved individually expressed their disgust at the animal killings, with lead actor Robert Kerman allegedly calling Deodato “a sadist” for his directorial approach. Actors guilds, and workers rights, have developed, and this would simply not be allowed to happen.

These aspects of the movie don't fly in 2020. Sure, we can accept fictional violence, but cruelty to animals, and the alleged mistreatment of the cast, are uniquely distressing – and will likely remain the shocking legacy of Cannibal Holocaust.

For more horrors, check out our list of the best horror movies of all time.