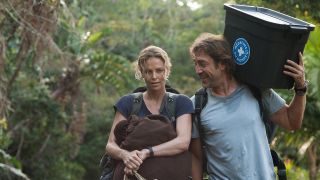 Of the numerous war crimes committed in Sean Penn’s African refugee drama The Last Face, among them the graphic slaughter of innocents, the worst is the risible dialogue poor Jean Reno finds himself lumbered with. “It is not grabbing, it is loving” the French actor says with anguished conviction. If the laughter that erupted around the Lumière at the film’s debut screening in Cannes is anything to go by, the only thing audiences will be grabbing are their coats.

Well-intentioned Penn may be, but this earnest story of love amid the backdrop of war-ravaged Liberia is more successful as a comedy than the worthy, heart-wrenching human drama it desperately craves to be. Charlize Theron and Javier Bardem star as a pair of volunteer medical professionals for a Médecins Sans Frontières-style humanitarian organisation. Miguel’s a brilliant doctor committed to the cause, Wren’s the daughter of the organisation’s founder who sees little hope in what they’re doing on the ground, preferring to fight her battles in the world’s media. You’ll find it hard to care for either of them and, worse, the desperate situation in West Africa.

Insultingly bad on almost every level, The Last Face is a manipulative, preachy, sanctimonious mess of a movie that uses the continent and it’s supporting African cast entirely as set-dressing for a ponderous and pompous romance. Theron and Bardem are game, but their relationship is emotionally inert thanks to a barrage of low-flying platitudes and non-existent chemistry. Wren narrates the film with a redundant voice over consisting entirely of high-school-poetry musings. Actual dialogue fares even worse, including the lines “she leaks urine, but she’s dancing” and “she thinks wars and women are my heroin”. Writer Erin Dignam penned 2008’s entirely forgettable Kristen Stewart/Eddie Redmayne weepie The Yellow Handkerchief, her work here won’t soon be forgotten.

Most problematically, human suffering and a vitally important crisis are treated like furniture. Not a single African character is developed in a meaningful way, most aren’t even given names – unforgivable given it’s (overlong) 132-minute runtime. It’s a film with no interest in the impact of war on its victims. It's offensively ignorant, but the white characters are equally underdeveloped, not least of which Jared Harris who pops up in a completely thankless supporting role, and Adèle Exarchopoulos who does the best she can with dialogue so ripe her announcement that she’s HIV positive caused a ripple of giggles.

Penn proved himself a director to watch with The Crossing Guard, The Pledge and Into The Wild, but here he completely drops the ball, his pious activism getting in the way of telling a dramatically satisfying (or remotely competent) story. Shot in an extremely shallow focus for no discerning reason, the African plains look beautiful on screen, but it’s never more than a postcard-pretty depiction of the continent. Penn also has an inexplicable obsession with the Red Hot Chili Peppers song “Otherside” - Bardem’s Miguel listens to it on his iPod throughout, at one point Wren and Miguel have a falling out over the lyrics, but the nadir is a sex scene soundtracked by an eardrum-upsetting acoustic version before segueing into full-blown Anthony Kiedis warbling. The use of the song makes no sense, especially when Hans Zimmer is on soundtrack duties alongside heavyweight vocalists Eddie Vedder and Mary J. Blige. But even Zimmer’s traditional African score is unadventurous and bland.

Still, given the subject matter and the calibre of the cast, Penn occasionally stumbles upon a powerful moment or image – a child’s intestines used as a barrier across the road or a scene where militia rebels hold the doctors hostage and force a child to put a gun to his father’s head do pack a punch, but they’re fleeting glimpses of the film this could have been in more confident and capable hands. Unquestionably the worst film to screen in competition at Cannes since 2015’s Sea Of Trees, which dropped off schedules shortly after debuting to similar vitriol last year. Don’t be surprised if this pulls an identical disappearing act.