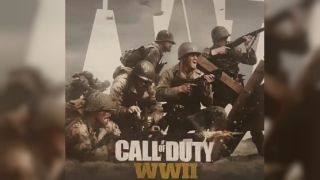 Call of Duty will return to WWII this year if a new leak is anything to go by. File it under 'rumour' for now but there's a lot of very well made World War 2 art, and what looks like internal documentation on a range of steelbooks.

The leak originated from TheFamilyVideoGamers, a small YouTube channel (433 subscribers) which received this email:

Just in case you can't read that it says:

I found your small youtube channel through instagram. I saw your post about glitching Rave in the Redwoods and thought that these images might be something you are interested in. These are legit and from the source, but I cannot state who. All I can say is that they come from someone very close to the project over at Sledgehammer

Attached were these images:

Now, just to reiterate, this is just rumour right now but Activision did say "Call of Duty would go back to it's roots" in February. There's also some provenance being suggested to names getting attached to the information for a previous history leaking games (although I'm finding that tricky to verify, they simply seem to be reposting the original source).

That is a lot of high quality artwork, though, and it's worth noting that the steelbook images appear to have small annotations that suggest we could be looking at internal marketing documents here. One thing that's been repeatedly called out is that these images are simply shots taken from Saving Private Ryan, something that no one has been able to back up yet.

If this does in fact turn out to be true then it looks we could be having another European beach landing. Call of Duty's done it before with Pointe du Hoc in COD2, and Omaha Beach in the PS2 only Big Red 1. (As well as Peleliu in the Pacific based World at War and the landing that opened up the Stalingrad level in the original Call of Duty.)

There's also been some talk that the 'WWII' bit is the same font as Advanced Warfare, the last game from Sledgehammer - the studio that's up for dev duties this year. It's not, but it is the same white/gold colour scheme for what that's worth. Sledgehammer also tweeted this out for New Year and a lot of people made a fuss about the old time looking gears in a series increasingly disappearing into space.

It's officially 2017! Some call it the zodiac year of the Hammer. Have a safe and fun New Year's, everyone! #SHGholidays pic.twitter.com/24qlku6ITdJanuary 1, 2017

If this is the next Call of Duty then we might find out fairly soon. Activision has been a bit more flexible with reacting to leaks recently, so let's keep an eye out this week for some surprise tweets or trailer drops.

Whatever your views on the potential for a more historical COD (there are some big implications for the competitive multiplayer side) there's no getting away from the fact that Battlefield 1's WW1 setting reinvigorated that series.