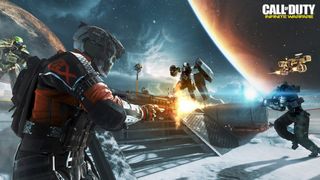 When does the Call of Duty: Infinite Warfare beta start? Well that depends which console you've got. If you've pre-ordered on PS4, the beta kicks off for its first weekend on October 14 at 6pm GMT/10am PT until October 17 at 6pm/10am PT. If you've playing on Xbox One though then you'll get access to the second weekend which starts October 21. Yep, that's a week early for PS4 owners.

The second week of the beta is for PS4 and Xbox One owners and runs from 6pm GMT/10am PT on October 21 until 6pm/10am PT on October 24. We're still waiting for exactly what it'll contain but you definitely need to pre-order the game to have access to the beta on either week.