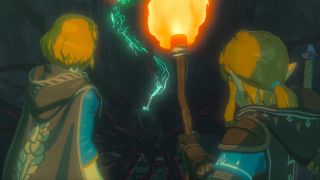 The follow-up to 2017's The Legend of Zelda: Breath of the Wild could be releasing as early as next year, according to a leak from a source with a reliable track record. Twitter user Sabi says Nintendo is tentatively planning for a 2020 release date, but notes the Zelda franchise's well-known history of delays.

I would tell you Botw2 is planned to release in 2020, but Zelda release dates are historically delayed, internally or publicly LOLNovember 12, 2019

Sabi also clarified that they aren't merely speculating about Nintendo's plans to release Breath of the Wild 2 in 2020, and that the leak is based on "current plans." One response asks the journalist and rumor source to clarify whether it's actually scheduled for 2020 and whether fans should take the leak with a grain of salt, to which Sabi responds, "yes."

2020 would seem almost shockingly early for a sequel to a game with such a massive scope, and no less a sequel which was only announced five months ago. For reference, Breath of the Wild released roughly six years after Skyward Sword, which released roughly five years after Twilight Princess. Though, looking way back, Ocarina of Time, Majora's Mask, and Wind Waker each released about two years apart. If Breath of the Wild 2 actually ends up dropping in 2020, it'd be a rare move from Nintendo, but not one entirely without precedent.

As Sabi points out, it's best to take this info with a big grain of salt. Leaks are leaks, and delays are delays, but Sabi is a fairly trusted source for video game rumors, previously leaking a good chunk of the news from E3 2019 before it was officially revealed.

We know very little about Breath of the Wild 2, with a single reveal trailer existing as the sole bit of official information from Nintendo. We do have a few job listings that seem to suggest Nintendo is putting a bigger focus on dungeons in Breath of the Wild's sequel.

Look out for the best Black Friday game deals to score the year's biggest releases on the cheap.