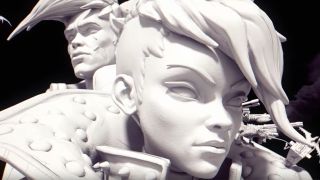 With Borderlands 3 almost definitely going to be announced at PAX East, we finally have a teaser trailer, and although it doesn’t have any gameplay it is glorious. You can watch it above, and by the looks of it Gearbox has gone all Black Sails, bestowing upon us Vault Hunters a sleek, marble-like sculpture of all the key players that we’re going to becoming acquainted with in what should be the sequel to Borderlands 2. But since the latest Borderlands game to come out was the Borderlands Pre-Sequel, it’s anyone’s guess when Borderlands 3 is going to take place. To be honest, I’m still bathing in the glow of the fact that Borderlands 3 has almost been confirmed, so I’m alright with this temporary lack of information - we can find out more on March 28 at Gearbox’s PAX East stream, which starts at 7pm GMT / 2pm EDT / 11am EDT. I can’t wait. Seriously.

19 things you missed in the new Borderlands trailer: Tiny Tina’s grown up, Lilith's your enemy (?), and Atlas might have a Psycho army

Characters both old and new are in the Borderlands 3 teaser, and yes, it looks like Lilith, Brick, and Mordecai will be returning, though there’s no sign of Roland (RIP). I’ve written a full Borderlands 3 trailer breakdown reveal if you want to sink your skag-like teeth into every single detail you might have missed, but if this trailer is anything to go by, Borderlands 3 is keeping everything that made Borderlands, Borderlands 2 (and the pre-sequel) so special: our core cast of characters is returning, basic baddies like the psychos, skag, and rakk are staying the same, and there’s going to be guns. Lots and lots of guns. Now if you’ll excuse me I need to go and watch it another 23 times. Don’t judge me. You know what they say: once a Vault Hunter, always a Vault Hunter.

If you’re salivating for some FPS action after seeing that teaser, here’s the best FPS games to play right now, or look below to see the secrets we found in the trailer!