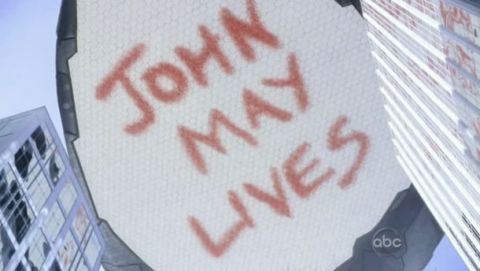 THE ONE WHERE Anna tries to eliminate the Fifth Column before they can build a stronger army against her.

VERDICT After last week’s entertaining episode (finally!), it appears that the show has gone to shit again. Okay, maybe I’m being a little bit too harsh but I’m just so tired of being disappointed by V. There are only two reasons why I’m still watching it: because there’s nothing else on television at 10pm on Tuesday night and because I have faith that the show will eventually get interesting. But so far the biggest problem that I have is that it’s too late at night to be watching something this boring – I’ve often nodded off before the end of the episode.

Other than Anna, the characters don’t hold my attention. When Georgie is captured after helping Ryan escape the mothership and then is seen being tortured by the Vs, I didn’t feel for the character at all because I just don’t care enough about his presence on the show. And the same goes for all of the characters; there’s no connection with them. And the only reason I take a small delight in the scenes with Erica is because the actress (Elizabeth Mitchell) is from Lost. But that’s certainly not enough to keep me satisfied. I could just be watching Lost reruns!

The one thing I do feel gratified by from the series is all the alien gadgetry. The CGI is neat and very science fictiony. I especially got a kick out of the empathiser-detector thingie in this episode. The use of Anna’s machines that test human emotions is clever because the show is able to stress the importance of understanding the human condition. Being able to feel empathy and compassion for others are traits belonging to the good guys. But so far the good guys are still morally questionable and the bad guys aren't showing their true-colours, so there's not enough character development to get too excited about anything.

The 29 Visitor ships are strategically placed all around the world, so I’ll continue to keep watching the show somewhat patiently for the action to start. Although I might fall asleep during the next episode trying...

THE CHOSEN ONE Who is Tyler Evans, really? What is so special about him that causes Anna to have such an invested interest in him? There’s even more mystery surrounding him after Joe (his father) says to Erica, “It’s time that we told him the truth about who he really is.” Oh the suspense of it all! No, not really.

V’S GO BOOM The special effects of the Fifth Column suicide bombing on the Sydney mothership was really cool - the group of Vs exploded like water balloons being popped. Neat.

A HEALTHY DIET Every person needs a small amount of phosphorus in their diet to help aid in the formation and maintenance of bones and teeth, but without high doses of phosphorus in her system Valerie won’t survive her pregnancy. Lucky for Valerie however, the Vs have developed a vitamin supplement that can easily be slipped into her tea... Although a much more entertaining way for her to get the mineral into her system would be to watch her satisfy her hunger pangs with dead rodents. Everyone knows that mice are a rich food source for phosphorus...

STATE OF BLISS There really is no denying that the sound of Morena Baccarin’s voice is blissfully hypnotic. Don’t try to fight it. “All hail hypno toad!”