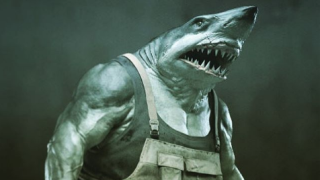 A mere 48 hours ago Michel Ancel sent us into a frenzy of wishful thinking after posting what looks like Beyond Good & Evil 2 concept art on Instagram. Not content with that, he's only gone and done it again with this image of a toothy, muscular sharkman which looks a bit more like its from an actual game rather than just sketches.

While on one side this is just further proof that work might finally be underway on the long awaited sequel - the original had the less realistic looking sharks Francis and Rufus - but the caption reads "ready for the fight." This could just be about the shark's stance but is more likely to be Ancel's commentary on today's Ubisoft shareholders meeting where Vivendi is attempting to place a stake. Vivendi has gradually been purchasing shares of Ubisoft over the last few years and the french publisher is trying to resist the takeover.

"We won't relax until they sell their shares," Ubi CEO Yves Guillemot has told the Wall Street Journal. "The creeping control strategy implemented by Vivendi is dangerous. We think that there's a great risk of shareholders losing value." We might be getting exciting images out of it but the staff at Ubi clearly aren't happy with the situation.