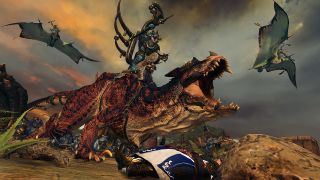 There’s nothing quite as satisfying as the moment when everything starts to click into place in a strategy game. Whether your virtual city is running like a well-oiled machine, your civilization is thriving, or your army emerges victorious from a tough battle against an enemy base, being the one in command can be very rewarding. From rich turn-based numbers to fantastic RTS titles, there are plenty of options out there that will offer up all kinds of different challenges to keep your strategic side sated.

While the genre has a rich history of great offerings and we can't include them all, we’ve gathered together a nice variety of the best picks to appeal to both newcomers and veterans alike. So in no particular order, here’s our pick of the best strategy games you can play right now in 2019.

Considered to be one of the best 4X turn-based style strategy series around, Civilization 6 is the latest offering that builds on its predecessor to bring us something slightly more refined and polished. While it’s great for veterans because it brings some new elements into play, it’s also more accessible for newcomers thanks to its tutorials that will help you get to grips with the general concepts of Civilization. From the Stone Age to the Information Age, you control and determine the rise of an entire civilization, which now physically expands across the map to show you just how big it’s grown. With new features like active research in technology and culture, 20 leaders to choose from who all have different agendas to pursue, and multiple ways to emerge victorious, there are plenty of tactical approaches and playstyles to get stuck into. And the recent Gathering Storm expansion (which is just one of the many DLCs) introduces a climate change system that presents additional challenges to your growing civilization.

Subset Games’ isometric sci-fi roguelite is a nice compact turn-based affair that takes place on an 8x8 grid. Highly replayable thanks to its varying procedurally generated challenges, it pushes you to think carefully about your strategic approach each turn. Alien nasties known as the Vek are breeding underneath the earth and pose a serious threat to humankind. It’s up to you to save the world by beating every challenge it presents you. If you fail, you essentially reverse the timeline to try and conquer the challenge again. By controlling different mechs and weapons, you encounter unique mech pilots and find more weapons throughout your battles to give yourself the upper-hand the next time around. Different civilian buildings power your mechs, so you also have to be mindful of their welfare and make sure you don’t accidentally blow them up yourself. With an appealing pixelated style, it also has a pretty interesting story-line, and its procedurally generated challenges puts your tactical skills to the test and keeps it feeling fresh.

If you’re after a challenge, XCOM 2’s alien invaded world doesn’t pull any punches. Turn-based in style with expansive terrains to navigate, the sequel is much bigger in scope than its predecessor. After XCOM: Enemy Unknown saw you try to prevent an alien invasion, the second sees you command the last remaining XCOM forces - who are the last line of defense against the aliens that now rule the Earth. Perma-death adds an extra level of difficulty to every decision you make because every choice could have disastrous consequences for your troops. Taking control of the alien supply craft known as the Avenger, you’re up against impossible odds as you set out on missions with unique challenges, facing new foes and tactically approaching each fight . You also need to try and rescue fallen comrades and research and upgrade your weapons and armor. And if this sounds like your cup of tea, last year saw the release of the excellent jam-packed XCOM 2: War of the Chosen DLC, which is a game in and of itself that adds new classes and a challenging new enemy known as “ The Chosen”. This is one sci-fi strategy number that will push your tactical mind to the limit.

Creative Assembly’s Total War series has established a long line of stellar RTS titles that offer up challenging battles and tough campaigns, and Total War: Warhammer 2 is no exception. As the pick of the litter in a soon to be Warhammer trilogy, Warhammer 2 perfects and refines the Total War franchise to offer what is quite possibly one fo the best Total War games yet. The story takes place after High Elf mages forge a huge arcane vortex that uses the winds of magic to blast demonic hordes back to the Realm of Chaos. Suddenly the vortex goes out of control and stands to threaten the entire world. With massive real-time tactical battles against a diverse range of foes, you play as one of eight Legendary Lords who have different motivations for seeking to gain control of the vortex. Every Lord belongs to a different race in the much-loved Warhammer world, and each Lord has their own unique playstyles, campaign mechanics, approaches to war, army units, monsters, lore and magic. This diversity enables you to replay it time and again to try different narratives and approaches. Complex and richly detailed, Warhammer 2’s sprawling world, epic battles, exploration and engaging campaigns will you keep you on your toes.

The latest in the Anno series, Anno 1800 takes place at the dawn of the Industrial Revolution - a pivotal time in history that had a significant impact on the social, economical, and environmental climate. You’re thrown into the ever advancing new era, and it's up to you to decide how you want to run your very own industrious landscape - be it in in smoky cities of Europe, or the Jungle-filled climbs of South America. With ever advancing technology, plenty of social upheaval and a lot of messy politics, Anno 1800 lets you get stuck into running the city however you wish. With new features that let you go on expeditions and micro manage your factories, you can decide to milk your industries for all they’re worth, or help it thrive and prosper. As the technology advances and the landscapes change, you have to keep adapting your strategy to keep up with the times. It’s a challenging, addictive city builder that really requires you to take the time to think about your choices, and how you manage your way through the turbulent, exciting time in history.

You can play as a dog commander called Caesar. Really, that should be all the convincing you need, but with a fantastic turn-based system and lots of chances to test the strategically inclined side of your mind, Wargroove offers plenty of tactical challenges for players of all skill levels. Charming 2D pixelated graphics set the scene for its varying campaigns that are quite similar in style to the battles found in the Fire Emblem series, or the classic Game Boy Advance title Advance Wars. With three different modes including an online mode, puzzle mode, and arcade mode, you can choose from over 12 different commanders who all have their own unique personality, power and motivation. And if you fancy creating your own challenges to share with other friends or the Wargroove community, it has a very neat in-game editor that lets you craft your own custom maps, missions, sub-quests, and stories, as well as give you the ability to change up the rules of the game without using any mods.

As a grand strategy RTS, Stellaris lets you explore the vast expanses of space and puts you in control of an interstellar empire you get to customise. With a choice of various different alien races, government systems and faction traits to choose from, you can decide how you want your empire to run and how you’ll likely approach different situations. Whether you want to wage war, or peacefully explore space and be the voice of diplomacy, there are plenty of ways to go about things. There also opportunities to strengthen your empire and expand its reach by colonizing other planets and joining forces with fellow alien species throughout the galaxies. In the starry skies of space, Stellaris rewards you for your exploration efforts and presents you with challenging strategic spaceship battles and management systems.

If you enjoy big explosions and battles in space, this is just the ticket. Based on Game Workshop’s tabletop game, this RTS lets you play out massive naval spaceship battles in the Warhammer 40,000 universe. Building up from the first in the series, Battlefleet Gothic: Armada 2 lets you choose from 12 factions from the tabletop game, such as the likes of the Imperial Navy, Drukhair, Necrons and many more. With tons of customisation options for your ships, you can command and conquer your way through enemies fleets and have a blast while you’re doing it. If you want to just dive into a battle you can, but there are also three main faction solo campaigns to strategize your way through with the Tyranids, Necrons or the Imperium.

It's not an easy to task to run an entire city, but Paradox's Cities: Skylines manages to make it a very enjoyable one. From natural disasters to traffic jams, you'll have all manner of problems to deal with when it comes to ensuring your city and its citizens thrive. Since you build your city from scratch, you can be strategic about how you put it together. You have to try and fulfill all the requirements your city needs such as education, water, electricity, healthcare, and law enforcement. With a realistic economy system, various scenarios to play out and goals to reach, it really is a challenging simulation that often feels like a balancing act. But when it all comes together and begins to flow just right, all the thought you put into making everything get up and running feels incredibly rewarding. And with a vast selection of DLCs and mods to add, you can up the ante even more.

If you’re after a turn-based strategy RPG, The Banner Saga trilogy offers a deep, rich story that plays out through a series of tactical decisions and strategic battles. Every choice you make will have real consequences and could even result in the death of a character, which ups the stakes of your approach to certain events. You follow the saga of vikings in a fictional world populated by the Dredge race, who are heavily armoured soldiers that harbour a hatred for humans. Journeying along with a hunter named Rook and his daughter Alette, along with many other companions, you unravel a lore-filled narrative that hinges on the strategic decisions you make. If you’re after something that will push you to be tactical, but also offers up an engaging story that you have a hand in making, any of the Banner Saga titles will tick all the right boxes for you. And it's gorgeous art style and animated sequences make it all the more worthwhile.