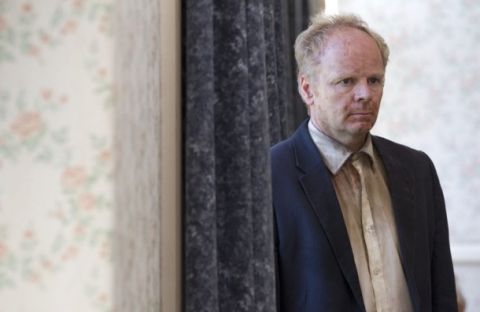 THE ONE WHERE Herrick comes back. Sort of. And things will never be the same again.

VERDICT Well, we’ve waited half a season for Herrick to come back from the (un)dead, and the payoff is definitely worth the wait. Sarah Phelps’s script is a masterclass in storytelling, verging on the theatrical for its simplicity. Extraneous sets and characters are removed in favour of a powerful script and core ensemble of great performances shown in virtually real time and a limited space, all of which helps ratchet up the tension from scene to scene until, by the end, you need a lie down in a darkened room to recover. We’ve spent a month in Honolulu Heights now, but director Philip John breathes new life into it, using every creepy corner to beef up the feeling of claustrophobia as events snowball – it’s thanks to him that by the end a load of boiling pots and a smiling man in a cheesy Hawaiian shirt watching a train set go round and round in circles is so utterly disturbing.

The naysayers who feared the return of season one’s big bad indicated a lack of creativity have been proved wrong in grand style. There are some brilliant twists and turns, and a script packed with great set pieces and characterisation. The different ways the awesome foursome implode under the strain of Herrick’s return is fascinating to watch, particularly the stand-off between Mitchell and George, with the former snarling “Who do you think you are pointing that stick at me, you f**king dog?” and the latter threatening to never tell his unborn child of his friend Mitchell – “it’ll be like you’ve never existed” – underlining particularly well how deeply the cracks have set in between the group even before the resurrection of Mitchell’s mentor.

While everyone has their chance to shine, this is very much a tour de force by Jason Watkins as Herrick. Armed with Phelps’s script his performance leaves the audience constantly questioning whether he’s truly evil and playing our heroes (and us) for fools before it becomes apparent that actually you don’t need fangs to be inhuman. His cruelty towards Cara – ”don’t you look ugly when you’re crying?” – and then the sinister playfulness of his cat and mouse chat with Annie about her place in the house – “you’re a bit peripheral, like a regimental mascot” – shows that even defanged he is a dangerous foe, while the moment when he shows Nina who’s really responsible for the Box Tunnel Murders is genuinely shocking: Things definitely can’t return to normal now...

Minute for minute this is one of the best pieces of television so far this year and one of the best episodes of the show ever. Outstanding, jaw dropping stuff, and even more impressive for its simplicity.

LOOSE ENDS Will Nina be the wolf shaped bullet? And bearing in mind her call to Crimestoppers , is she a figurative rather than literal one? What happens when Herrick does finally remember who he is? With Annie poltergeisting in distress after Mitchell dumps her is the script pre-empting something important when she tells him: “I think about what and who I love and I think about them in danger and I could tear this bloody house down with my teeth. You have no idea how strong I am.” ? Also, while you can’t help thinking Mitchell/Annie should have just staked Herrick when they had the chance, if you’re only going to be shouting at the TV for one stupid decision by our protagonists this week then it has to be at Mitchell for not burning the evil scrapbook when he first brought it home...

FLASHBACKTASTIC Writer/creator Toby Whithouse told SFX in a recent interview that the pre-credits flashback for this episode was dropped because every re-write risked hinting to the audience one way or another whether Herrick was back on vampiric form.

STARSTRUCK Nicola Walker is most well-known for her role as Ruth in Spooks . She is also an old friend of writer Sarah Phelps – the role was written specially for her.

POP CULTURE REFERENCE OF THE WEEK Not much time for fun, although the concept of “social services humour” is a suitably depressing nod for this week.

BEST LINE:
Herrick: “It’s going to be the most beautiful day...”