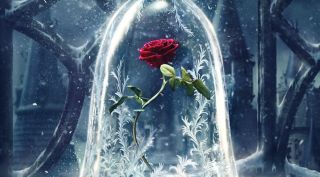 Back in May we got a fleeting first look at Disney's live action adaptation of Beauty and the Beast in a short teaser. The most memorable aspect of that trailer was the instantly familiar music, and the first poster for the film has similarly elected for imagery that's immediately recognisable to fans of the 1991 animated film.

Take a first look at the poster of Beauty And The Beast. Arriving in UK cinemas Spring 2017 #BeautyAndTheBeast pic.twitter.com/ocORiz6YzaJuly 7, 2016

The poster manages to be both simple and beautiful, which is not always the easiest combination to pull off. Of course, Beauty and the Beast has the benefit of being an adaptation of a classic, which means the imagery of a rose in a glass container is all that's needed here. While poster drops are usually one of the telltale signs that a new trailer is soon to be gracing the web, I'm not sure that's the case here. Would love to be proven wrong though!