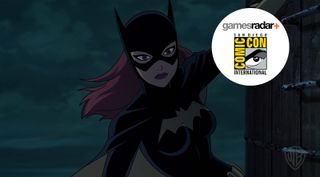 WARNING: This article contains spoilers for Batman: The Killing Joke.

Although Batman: The Killing Joke is a fascinating study of the relationship between the Caped Crusader and his arch-nemesis, it's also one of the most controversial comic book stories ever told due to The Joker crippling Barbara Gordon aka Batgirl. The news that the animated adaptation would have a 15 minute Batgirl-centric prologue designed to make her more of a character as opposed to character motivation was therefore greeted enthusiastically, but as it turns out it only makes Barbara's 'arc' more controversial. And how does it do that...

By having Batman and Batgirl have sex on a rooftop. Seriously.

idk how to feel about this pic.twitter.com/gsBGHsYet5July 22, 2016

The film premiered at San Diego Comic Con over the weekend, and fans have been understandably peeved at this unexpected development. While speaking with Vulture, executive producer and DC animated legend Bruce Timm gave his two cents on the decision to include the sex scene:

"We were aware that it’s a little risky. There’s definitely some stuff in that first part of the movie that’s going to be controversial. Here’s where we came down on that specific issue: It was really important to us to show that both of the characters make some pretty big mistakes. I mean, his “parental skills” aren’t that great. Maybe never having had any kids of his own, he doesn’t realize that if you tell a kid to not do something, they’re going to want to do it even more. And then she makes some mistakes and then he kind of overreacts to her mistakes and then she overreacts to his overreaction. So it’s very human; it’s a very understandable story. It’s tricky because it’s messy, because relationships are sometimes messy. But to me and to [co-producer] Alan Burnett and to [screenwriter] Brian Azzarello, Alan and Brian, it was all very fascinating to us to explore that angle".

I'm a massive fan of Bruce Timm's work in DC's animated universe - indeed, I've long held that he should have more of a role in the making of DC's live action movies - but the decision to have Batman and Batgirl be lovers is disappointing on a number of levels. It doesn't further Barbara as a character at all - in fact the aftermath of the sex scene makes Barbara come off much worse - and ultimately it's just another layer of motivation for Batman to hunt Joker down. It seems a little odd that a company who just released a terrific trailer for Wonder Woman is treating one of its premier heroines so poorly.

Starring Kevin Conroy, Mark Hamill, Tara Strong, and Ray Wise, Batman: The Killing Joke will be playing in cinemas for two nights from July 25, 2016 before being released on DVD and Blu-Ray on August 2, 2016.