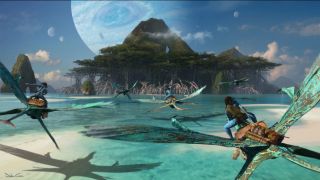 James Cameron has unveiled our first glimpse of Avatar 2 at the CES 2020 trade show. In a series of jaw-dropping pieces of concept art, we’re provided with a new look at the sun-kissed vistas of Pandora as well as some of the animals that will accompany the Na’vi in the 2021 sequel.

The Avatar 2 concept art (H/T Variety) sees a pair of Na’vi – possibly Jake and Neytiri, though it’s hard to say for sure – overlooking an ocean dotted with mini islands. In the distance, the bird-like banshees soar through the air.

We even get a closer look at a mysteriously-shaped rock, which hints at something man-made having been present on Pandora in the past. If you look towards the water, you’ll even eye a handful of Ilu, the creatures that populate the seas of Pandora.

If there’s anything to take away from the Avatar 2 concept art (other than making us want a beach holiday, pronto), it’s that Cameron and his team are looking to create a rich, dense fictional world like no other. The original Avatar opened our eyes to what was possible with 3D technology – this could be another leap entirely.

But it’s not just the flora, fauna, and critters that will stand out in Avatar 2. Cameron told CNET: “I also love the hard stuff. The vehicles, spacecraft, aircraft, ground vehicles, weapons, the hardware. I’m a total geek when it comes to that stuff. We have a lot of cool vehicles for you.”

Two final shots, though, focus on the natural world and see the Na’vi coming in to land on a flock of Banshee. There’s even a breathtaking night scene to coo over.

If Avatar 2 comes anywhere near to how gorgeous this concept art looks, Avengers: Endgame may not be able to hold on to its box-office crown. We won’t want to ever leave the theater. Avatar 2 is set for release on December 17, 2021.

It's not 2021... yet. Focus on the upcoming year in film with our movie release dates guide.