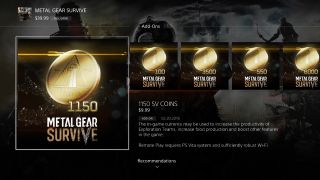 Metal Gear Survive is currently having some issues, with missing updates preventing people from playing the new Metal Gear. But the microtransactions are live, with options running from $0.99 to $50 for 'Survival Coins.'

Here's the full price range as it currently appears on the US PlayStation Store:

The SV coins can apparently be used to "increase the productivity of Exploration Teams, increase food production and boost other features in the game." I guess we'll get a better idea of how they affect gameplay when the Metal Gear Survive update arrives.

If you want to know more about the game we've got a chat with Metal Gear Survive  producer Yuji Korekado about trying to create something new with the series familiar gameplay.