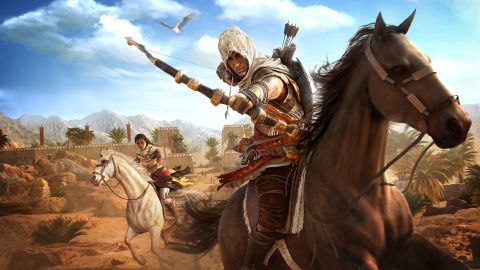 As beautiful as it is deadly, Origins’ Egyptian playground is finally everything you wanted the Creed to be.

Assassin’s Creed Origins is a game of stories. Stories you’ll uncover in the depths of sandy tombs on fading parchment, stories straight from the mouths of Ancient Egyptians feeling cursed by their vengeful gods, and then bigger, infinitely sillier stories that you’ll remember on the way to real work the next day. How you were admiring the way the morning light sparkled on Lake Mareotis only to be set upon by a clan of cackling hyenas on the beach, when you managed to escape a tomb via an underwater passage but had barely taken a lungful of air before you were savagely attacked by hungry crocodiles. Or, potentially, the time you meant to switch to your sleep darts while hidden in a haycart but ended up popping up in the middle aiming your bow like a neon-covered target and having firebombs lobbed expertly at you by high level guards... Yes, it was a raging inferno in seconds, and no, I didn’t last long.

I have a lot of stories and, while Anubis greets me at the end of some of them, others see Bayek and I riding into golden hued sunsets of Ancient Egypt to create more. More ridiculous adventures where hungry vultures circle, and cruel, masked gladiators race across the desert sands in chariot pursuit. Assassin’s Creed Origins might celebrate a whole decade of the franchise - insert joke about feeling old here - but a year off for the series means that this leap of faith into the Animus might just be the spinning 360° pinnacle of the series so far. You’re no stranger to sneaking around with your hood up, but the Creed has never felt anything like this.

The forging of the Brotherhood means a violent redefining of what makes an Assassin’s Creed game and while you’re always going to know what you’re playing, the experience in store finally feels truly fresh. The combat system of yore has thankfully been buried alive in the desert (queuing patiently for its trip to the afterlife), tailing missions have died quietly without a fuss, and a map of pointless collectibles has had a rock tied to it and been sunk in the Nile without ceremony. What’s left is a slimmer, leaner Creed. No irritating bells and whistles, just the whole of Ancient Egypt as a richly woven tapestry of murderous RPG. Oh, and it’s huge.

While Creed maps have seemed overwhelming before, they’ve got nothing on Egypt. Hit the map and you’ll have to zoom out for four seconds longer than usual and that’s before panning across endless different regions, each with their own distinct feel. This isn’t just a world of deserts, pyramids and palm trees. The impressive story campaign guides you through beautiful lush farmland, craggy mountains and Greek cities before leaving you to unwrap the rest of the world like a giant living hidden-blade wearing Christmas present. Origins has no qualms about delivering you to entire cities complete with Coliseums 80% of the way through your campaign, knowing full well you’ll be back for more once it’s all over. The sense of scale only escalates and, playing on Xbox One X, the visuals are nothing short of spectacular whether you’re watching the morning sun rise over seas of sand, or hurtling over the red rooftops of Alexandria, realising that the tiles underfoot sound just like Assassin’s Creed 2’s Florence.

Need tips to get started?

Egypt then is going to eat you alive. Literally and figuratively. While the roaming wildlife creates constant moments of peril with relentless hunger and sharp teeth, just going in any direction will deliver something you had no idea you wanted to do. How about freeing the rebels trapped in this enemy camp? No? Oh I’ll just grab some leather for Far Cry-style bag upgrades… Oh wait, I’ve ended up jumping on a boat and rescuing a priceless bust from the bottom of a lake... The new quest system is dangerously involved. Gone are the flashing fetch missions of old. Egyptians need your help and while starting one quest might seem like something small, you might uncover a table of even more quests or end up a part of a series of missions that previous Assassin’s Creed games could have only dreamed of. Go everywhere, climb everything even if it doesn’t have handholds, dive everywhere. The open world gauntlets are off.

Brilliant characters and genuinely emotional dialogue means you’ll feel your way through every part of Origins. While there’s a strong sense of humour running through Egypt - “why did it have to be snakes?” howls Bayek in one tomb - there’s true feeling at work here and the eternal presence of death manages to simultaneously be trivial as you cut down endless guards in inventive ways, and heart wrenching as you see its consequences in both the campaign and multi-layered side quests. Fine. I cried. Once. And you’ll know when.

The couple that slays together…

As Assassins go, Medjay Bayek is pleasantly unique. While there’s going to be no spoilers here, he and his wife Aya’s quest across Egypt has a surprising beating heart. Marriage in games isn’t known for its keeping both partners, y’know, alive but their scenes are a refreshingly mature, if murderous, approach to love that’s balanced slaying and playing. Equality is the order of the day here too. Aya is just one of Egypt’s women who effortlessly reinforce that the fairer sex is not to be trifled with. There are no damsels in Ancient Egypt and a few sly nods from Ubi are telling. “How could you trust a woman to do this job?” exclaims Julius Caesar at one stage. How indeed, Caesar…

The levelling and abilities systems mean that while Bayek starts out weak and fighting for his life with a rusty blade, he gradually evolves into a hooded superhero. The choice of abilities is intimidating but spend points wisely and Origins evolves gradually around you. Group battles suddenly become less of a deadly brawl as you invest in a smoke screen, rooftop battles are instantly 300% more Hollywood when Bayek learns to push people off buildings with his shield and, if you’ve erred on the side of the predator bow, upgrading to be able to control your arrows turns Egypt into a murderous playground. No tailing missions, bonus slow motion, and remote control arrows should be on the poster. After 48 hours of play I was no longer a Medjay of Siwa, but a level 36 Assassin with far too many quests to do, a shield that put people to sleep when I blocked and a flaming sword. Go figure.

Deftly implementing a Destiny 2-style colour scheme, the loot system is constantly rewarding. A wide range of deadly implements means you’ll always find something to make the most of the new combat system with. Dual swords are deadly up close and personal while a scepter or spear makes for ideal long ranged play. The combat itself took me a few hours to get used to after hammering a face button for 10 years but raising a shield and a heavier emphasis on dodge quickly becomes second nature and far more rewarding. Whether you’re jumping into the gladiator arena or taking on one of the uber boss Phylakes across the world, your style constantly has to change. Mega shields need to be smashed, giant hammers dodged, weak spots hit. This is no longer just a case of spamming the counter button and letting it do the hard work for you. Every finishing move is a gory full stop of victory, and you’ll always want to try new loots perks for size. Poison on hit? I don’t mind if I do…

And then there are the tombs: the moments of history hidden under the sands, the secret passageways with sand running from the ceiling and scarabs scuttling over hidden entrances. With Sarah Schachner’s atmospheric score whispering in your ears, exploring the mystical realms of Origins is everything you wanted from an Ancient Egyptian Assassin’s. Puzzles, buried treasure, rooms full of mummified cats (?!), it’s all here if you go looking.

And looking is the order of the day. Origins craves you to take in its views. While some areas will require you to hunt down hidden treasure, others will only ask you to find a place to rest where you can sit down and take in the view. Away from the killing, away from the endless fire from shattered oil jars, Assassin’s Creed Origins is the most beautiful game in a series of beautiful games. Riding through fields only for clusters of flamingos to rise into the skies in bursts of colour, or waiting on a bobbing felucca for the sun to rise, it demands your eyeballs.

Photo mode will be your new addiction then. Whenever Origins is getting too pretty to cope, all you need to do is tap both analogue sticks and you’ll be in Instagram heaven. Filters and an impressively untethered camera means you’ll be freezing Bayek half way through every leap of faith or pyramid slide just to capture that perfect moment. You can even admire everyone else’s handiwork on your map and heart it Instagram-style as they appear across the world.

And the modern day? No spoilers here but it’s very much there but easily dismissed if all you want is the delights of history. For lore fans though, this is a step in the right direction for a streamlined story to come and a computer of files is worth draining for info. Adding yet another layer to an already impressive world, this is the most cohesive Assassins experience yet. And does it explain everything for 10 years of the Creed? Of course it does. Everything gets an origins story. Feathers, missing fingers, hidden blades, the Creed itself and even that logo. Everything is present and correct and the campaign conclusion will send Assassin’s Creed lore fans suitably giddy while simultaneously teasing a new era of Creed for the years ahead. Confident, exhilarating and utterly deadly, Assassin’s Creed Origins is now, finally, the one to beat.

As beautiful as it is deadly, Origins’ Egyptian playground is finally everything you wanted the Creed to be.