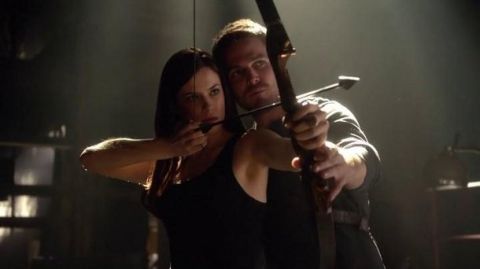 THE ONE WHERE: Oliver believes he can redeem Helena as she takes the fight to the Triad – and exacts vengeance on her own father. Walter and Felicity begin to investigate the dark truths at the heart of Queen Industries…

THE VERDICT: An episode that swings between the two show styles fighting for the soul of Arrow : smart, darkly inflected superhero fare and a shiny, vacuous daytime soap that asks us to engage and empathise with characters who straight-facedly say things like “Don’t you remember when we went to Aspen and you wanted to open a ski lodge?” If “Vendetta” ultimately tips towards mediocre soap mode it’s because we’re presented with some particularly trite character interplay and dialogue that frequently sounds like a leaden clattering of cliches: “Nick was like a brother to me,”; “Oliver, I want to let you in,”; “No, I’m sorry – sorry I ever listened to you!”; “I know you were trying to help – I guess I just couldn’t face reality!”. Yes, The Bold And The Beautiful continues after this word from our sponsor… Of course no daytime soap ever played the card of a masked, crossbow-wielding woman commiting fratricide – well, you’d imagine - but even when “Vendetta” tries to trade in some darker musings on the nature of justice it’s scuppered by some equally clunky expositional dialogue. Pity: director Ken Fink does good work here, from some adrenalising gun-play in the mansion siege to that lovely 360 degree pan around Oliver and Helena.

TRIVIA: “Does it come in purple?” asks Helena as Oliver shows her his vision for her costume. “I like purple!” Yes, it’s a knowing nod to the Huntress’ more colourful crimefighting clobber in the comic books.

RANDOM HILARITY: Colin Salmon’s priceless facial expression as Felicity enters his office, switches off the light and tells him “It needs to be dark in here if we’re going to do this.”

BEST LINES:
Helena: “Wait, so you two were together, and now you’re dating his best friend?”
Tommy: “Yeah, we’re just primed for a reality show here, aren’t we?”