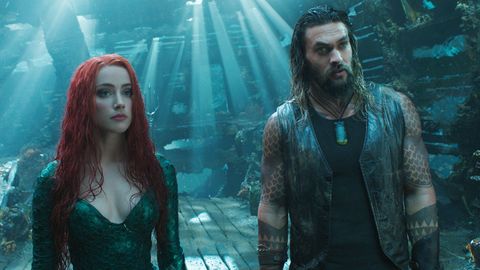 Extending the DC universe some 20,000 leagues under the sea, Aquaman takes place post-Justice League, though you wouldn’t necessarily know it. Fair enough – we’d all rather forget 2017’s superteam cut-and-shut. In any case, keeping things standalone seems wise in a film already stuffed to the gills.

Although it’s our third encounter with half-man, half-fish Arthur Curry (Jason Momoa), this is partly framed as an origin story. It’s also a war movie. And a quest narrative. And a revenge yarn, centred on the film’s B-villain. It’s this latter strand that ignites the action, as Arthur torpedoes to the rescue of a sub besieged by pirates led by tech-savvy treasure hunter David Kane (Yahya Abdul-Mateen II).

It takes two prologues for Momoa-mentum to kick in: one involving Arthur’s parents (lighthouse keeper Temuera Morrison; Nicole Kidman’s runaway Queen of Atlantis); the other a Harry Potter-esque aquarium incident. Despite the staggered start, act one is enjoyably light on its feet (flippers?), whether it’s Momoa flexing muscles (and eyebrows) to his own guitar riff, à la Wonder Woman, the young Arthur discovering that sharks have his back, or Kidman staring down a dog.

Aquaman ending explained - everything you need to know after watching

Problems arise when our hero is sucked into preparations for war that are bubbling in Atlantis (to which he is the rightful-but-reluctant heir). Tension is diluted by tidal waves of exposition. Visually, the water-world-building is full of dazzle and detail; all the bioluminescence makes it look like a submerged Tron. But none of it feels particularly lived-in, a niggle not helped by the plot whistle-stopping us from one sea kingdom to the next at the speed of a drumming octopus.

You’d think the setting(s) would give the cast licence to binge on the scenery like a malnourished Meg, but Momoa and Kidman aside, no one here feels larger than life. As antagonist Orm, Patrick Wilson does a few sly squints, but broad isn’t his forte; the story cries out for a bigger big bad. Ocean VIPs Willem Dafoe and Dolph Lundgren, meanwhile, have little to do but ride around on a hammerhead and seahorse, respectively. When all the chess pieces are finally in place, we get a climactic clash big enough to choke a kraken. Spectacular as it is, it’s not always clear who’s lancing laser fire at whom, and which army of squid-headed soldiers we should be rooting for.

Horror veteran James Wan (the Saw/Insidious/Conjuring series) feels more at home with an assault by spiny sea-devils that cuts a nightmarish swathe to the Earth’s core. Or, recalling Wan’s Fast and Furious 7, there’s the Sicily-based chase set-piece that serves as Aquaman’s standout. Vaulting between rooftops, it’s a scene that reinforces Amber Heard’s Princess Mera not as a sidekick or tagalong love interest but as a superhero in her own right. If her and Momoa’s bickering is more forced than flirty, sparks fly when they’re ganging up on the bad guys.

Aquaman’s echoes of Marvel hits like Black Panther and the Thor series (fantastical kingdoms; high tech twinned with ancient tradition; young rulers wrestling with responsibility) don’t do it too many favours. But compare its embrace of escapism and sense of grandeur with the posturing gloom of Batman v Superman: Dawn of Justice or Justice League’s weedy spectacle, and it feels like a step in the right direction for the DCEU. What’s more, its hero’s former ‘joke character’ status is kept well at bay.

For more hotly anticipated films, check out our list of the upcoming movies you don't want to miss - and while you're at it, why not take a look at the films we think are the best movies of 2018 (so far)?