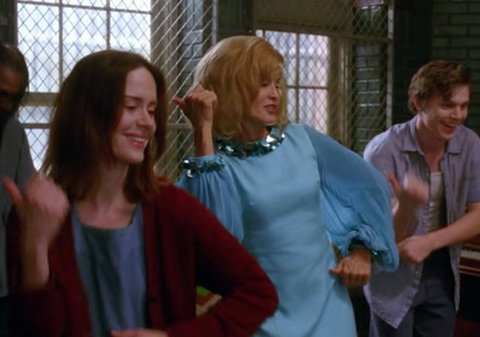 THE ONE WHERE Thredson gets a new job at Briarcliff. Jude is tormented by Eunice. Arden meets the aliens and doesn't like what they have to say. And there's a dance routine.

VERDICT And we're back, for the final four episodes of Asylum . And holy crap, what a way to start! “The Name Game” contains the season's best scene followed by two big surprises. The endgame I was predicting after episode nine now looks hilariously wrong. It's a horrible, overused cliché, but “The Name Game” is, well, a game-changer.

So, Arden resuscitates Kit, but lies to him about the aliens coming. Not surprising, since the main message we got from that encounter was Pepper telling Dr Death that he's basically an intergalactic laughing stock. Bad for the ego that. She also states that she is now Grace’s protector. That’s cool – though we see little actual evidence in the episode.Even later on, as Thredson menaces Kit, all that Pepper and Grace do is sit around grinning like dickheads. Clearly meeting aliens turns you into an idiot.

Over to Jude. The poor love gets put through the ringer yet again, as Eunice and Arden give her a nasty course of electroshock treatment, leaving her a hollow shell. Will she recover? It'd be a shame if this is the end of her arc. Jude is fascinating, and Lange has brought human frailty to this initially deeply dislikeable character. Still, there's enough of her left to be able to tell the Monsignor what he needs to do to defeat Eunice: “Kill her.”

Yep, Monsignor Timothy is still alive. Last time we saw him, you may recall, he had been crucified by Bad Santa and was facing the Angel Of Death (this show really does encourage you to write the strangest of sentences). He survived, but his ordeal was not for nothing. Death pointed out the bleeding obvious to him – that Eunice is a wrong 'un. After screwing up so badly over the season, this near-death and rebirth invests him with a new purpose, and he sets out to try and save the naughty nun's soul. Not before shagging her, though. Oh, the clergy!

Joseph Fiennes has been oddly underused in the series, so it's satisfying to see his character finally pick a side and stick to it. He does indeed try to kill Eunice and, unexpectedly, succeeds. After a huge rant about taking over the church, she has a brief moment of lucidity, and gives him permission to do what's needed – so he pushes her to her death. Needless to say, with three episodes still to come, I did not see that coming.

You could argue that Eunice's death is perhaps a bit too casual. She's the season's big bad, and I would have liked to have seen a bit more of Eunice herself at the end. Still, it feels like the right time. There's only so long a character can flounce around being comically evil before it gets dull. And it also led to the episode's other big exit – Dr Arden, who lies on top of her body, and incinerates himself. Crikey!

Arden's been an odd character. At times I've found him fascinating, at others just baffling and stupid. Here we see him consider shooting himself, kill off his pet “raspers” (now that's a storyline that went absolutely nowhere) in a sulk, turn bitterly against Eunice and finally immolate himself. It's a great way for the character to go out and, like Eunice, it feels like exactly the right moment.

An event-filled episode then – and we haven't even talked about the single best scene of the series to date. Amidst all this chaos and carnage, Lana imagines a fully-choreographed song and dance routine. It's utterly mad, ridiculously out of place – and absolutely perfect. Every now and again this show will do something just for the hell of it, almost to test the audience and say, “Are you still with us?” This is a great example. Check Kit's Elvis sneer, and Pepper getting her groove on. It's a scene that's almost punk in its f-you attitude and I loved it.

So where does that leave us? Kit, Grace, Lana and Jude are all still in trouble. Thredson is back in business. The aliens are knocking about. And we've still got the present day storyline to resolve. Plenty to be going on with.

NAME THAT TUNE The song being played in the dance sequence is “The Name Game”, originally written by Shirley Ellis, but here sung by Jessica Lange.

BEST LINE
Pepper: “They laugh at you, Dr Arden. They make jokes. Here's a good one: knock knock. Who's there? Arden. Arden who? Arden you the quack who'd make a better duck.”