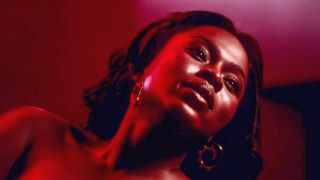 I'm gonna assume that if you read that headline and clicked through to read this article, you already know the deal with American Gods' sex scene. And if you don't, well, this is your one and only warning: SPOILERS and FRANK DISCUSSION OF SEXUALITY AND THE NATURE OF HUMANITY ahead.

So to recap: In the scene, Bilquis, a literal goddess, takes a man with her to bed. They begin to have sex, and before we can fully process what's happening, she devours him. With her vagina. It's a striking scene that's artfully shot, not meant for crude titillation, but to express something deeper and more meaningful - at least that's the intention, according to the people in charge.

Read more: Everyone's freaking out about THAT sex scene in the American Gods premiere

That blurring of the line between the physical act of sex and the metaphor of human connection is one Fuller has dabbled in previously. One episode of Hannibal (of which Fuller served as producer and writer) shows the titular cannibal making love to Alana Bloom and Will Graham making love to Margot Verger in a separate location - but the way the scene is shot, it gets visually confusing who is bedding whom, showing how the characters are all linked.

Yetide Badaki, the actress who plays Bilquis, said that despite her character's status as a deity, she still has a human need for connection. "Bilquis and all of these old gods have fears. Fears of no longer being relevant. Fears of being forgotten. It's very relatable, those ideas. There's this attempt to survive. You see them as extraordinary beings, but they're in ordinary circumstances in their day to day. How do you make a living now? They find themselves in dark places. Sometimes it's worse that they used to know so much beauty and glory, only to find themselves in this situation."

American Gods' sex scene may have been many things - grotesque, strange, horrifying, intimate, and a bunch of other adjectives. But it was also clearly a well thought out moment that the cast and crew believed in. Now, whether or not we'll ever be able to get it out of our heads… that's a different story.