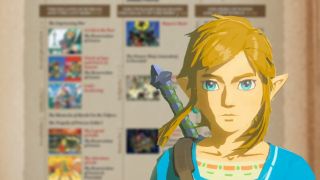 People have well-documented theories about where The Legend of Zelda: Breath of the Wild fits on the Zelda timeline, but Nintendo really doesn't want to say anything official. In fact, it's a little bit afraid to. I spoke with Breath of the Wild director Hidemaro Fujibayashi and series producer Eiji Aonuma about their game earlier this month, and - after congratulating them for all the Game of the Year 2017 honors - I had to ask if the timeline is still something they're interested in.

Both Fujibayashi and Aonuma were refreshingly upfront about their thoughts on the timeline, if not Breath of the Wild's place in it. I say "refreshingly" because the timeline itself is a trifurcated beast of retroactively reconciled lore. No games have ever directly referenced it - rather, it was introduced in the Hyrule Historia book, which came out around the same time as The Legend of Zelda: Skyward Sword in 2011. That whole business is anything but upfront.

"I wouldn't say that we're not concerned with the timeline," Fujibayashi began. "It's obviously something that we know is very important to people, and they do a lot of research on. But I think at this point, we're not really at the stage where we want to talk about where Breath of the Wild is in the timeline. I think, as with the pixelated food [Editor's note: of course I had to ask them what Dubious Food really looks like], it's something that at this point we want to leave up to people's imaginations."

He noted how the story references events that took place 10,000 years ago, giving fans material to come up with their own conclusions. Aonuma then joined in to give further reason why Nintendo's hesitant to set anything else in stone after the Historia.

"We published a book with the timeline, but we definitely got comments from users saying, 'Is this really accurate? I think this should be this way. It's different,'" Aonuma said. "And history is always kind of imaginative. It's left to the person who writes the book. So that's how we approach it as well. It's not necessarily that we come up with a game and think, 'Oh, this is where it fits in the timeline.' Honestly, lately, we're kind of scared to say exactly where things are in the timeline for that reason. But we like to leave things to the imagination most of the time."

So there you have it. Theorize away with the Zelda developers' blessing, but don't expect any official pronouncements from them. At least not until the Hyrule Historia 2 comes out in 2036 to reconcile another 25 years worth of canon.