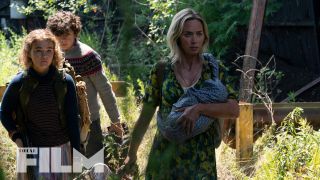 A Quiet Place was one the unexpected hits of 2018. Directed by John Krasinski, who also starred and co-wrote, the high-concept horror saw a family fighting for survival in a post-apocalyptic world ravaged by sound-seeking aliens. The Abbotts had to live their life in silence to evade the ETs.

As well as being inventively scary, A Quiet Place was also a surprisingly emotional family story. Krasinski’s real-life wife Emily Blunt co-starred as Evelyn, the family’s mother, while Millicent Simmonds and Noah Jupe were the kids. The film resonated with audiences to the tune of $340.1m worldwide, making a sequel almost inevitable.

Krasinski may not be returning in front of the camera because – spoiler warning for Part I – his character died at the end of the first film, but he is writing and directing the sequel that picks up immediately after the end of the original, and follows Evelyn and the children as they continue their survival story.

“I love the idea of the first one, that Emily and I as characters were all about surviving versus the thriving,” Krasinski tells our sister publication Total Film magazine in their new 2020 preview issue. Above, you can see an exclusive new image from Part II featuring Blunt, Simmonds and Jupe.

“All [my character] wanted to do was survive,” adds Krasinski. “And [her character] says, ‘That’s not enough. We have to thrive. We have to let these kids be whole human beings’. And after I’m gone, I’m loving seeing Emily really battle with that – that maybe survival was the way to go. And maybe this idea of thriving was too dangerous.”