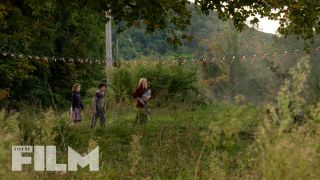 A Quiet Place Part II is one of the most anticipated upcoming horror movies of 2020. Like another notable Part II (The Godfather), it picks up straight after the events of the first film, but also flashes back to fill in some prequel gaps. Where A Quiet Place started in the aftermath of a sound-seeking alien invasion, Part II will show us what happened on Day One (as seen in the recent trailer).

The first film was a genuine sleeper hit, grossing $341m worldwide against a very modest budget, and established John Krasinski as a serious directing talent. A Quiet Place was lean and contained, and despite ending on an extremely kickass shot, didn’t seem like it was crying out for a sequel. Even Kraskinski himself was unsure.

“You know, I wrote the first one to be one thing,” Krasinski tells our sister publication Total Film magazine in their new cover feature.  “And then when it did well, and [the studio] were like, ‘We’re going to go do a sequel’ – I thought, ‘Great. Go find someone else. It’ll be great. Enjoy it.’”

Of course, Krasinski would go on to convince himself otherwise, as you can tell from these exclusive new images from the sequel, including a shot of the writer/director behind-the-scenes (below).

Star Emily Blunt (and real-life wife of Krasinski) initially felt the same. “We were aware that the studio was probably going to make a sequel, with or without us,” she tells TF.  “There was a sense of protection of this baby that John had created. And I think that ultimately he was always going to maybe grandfather the next one. But we were both very steadfast about not being involved. And then all of that mad reaction [to the first film] happened and he was suddenly like, ‘I have an idea. I don’t know. It’s just a beginning of an idea...’”

The crucial starting point came from reconsidering the role of daughter Regan (Millicent Simmonds) in the wake of the events of the first film [spoilers for AQP1 follow]. “The idea for me was not just to make Regan the lead of the movie, but why she was the lead of the movie was because she was the younger version of [my character] Lee,” Krasinski says. “And if she and Lee were soul partners, then there’s this idea of her feeling such guilt [about his death] – and what do you do with guilt? It can either consume you, or you can take up a mantle for someone...”