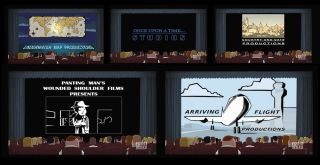 Back in the day it was so simple. A quick blast of the Fox fanfare or glimpse of the Warner Bros. shield and we’d be off to the races. So dominant was the studio imprimatur that no additional preamble was needed. How, then, have we reached the point that every film has so many company logos tacked on the top of it you could probably take a trip to the restroom and back without missing
a plot point?

Take the recent drama Hotel Mumbai, for example, which subjects us to no fewer than six separate intertitles before finally getting round to the movie proper. No doubt each one of the entities trumpeted (Screen Australia, Arclight Films, Singapore-based Xeitgeist Entertainment Group and so on) played an integral part in making this gruelling recreation of Mumbai’s 2008 terrorist attacks an actuality.

But did every one of them really need their own 10-second spotlight – immediately followed by a shout-out in the opening titles themselves? Credit where it’s due is all well and good, but not if it tips into self-aggrandisement.

Sure, some of these capsule-flicks exude enough quirky personality to ameliorate their presence – the little red machine that embodies J.J. Abrams’ Bad Robot scampering its way up to the camera, for instance, or Pixar’s hopping desk lamp.

Too often, alas, such logos are distracting, ostentatious or plain ill-conceived. Can anybody tell us, for example, why Hyde Park Entertainment’s ident features an image of Tower Bridge, or why Hollywood Pictures had a Sphinx on theirs? We could also do without “creative” variations, like when the Columbia Torch Lady neuralysed the audience in Men in Black: International.

Yet it’s the quantity, rather than the quality, that’s the true problem here – so much so, in fact, it has even come to one Peter Griffin’s attention. “I can never figure out when the hell the studio logos end and the actual movie begins,” he justifiably bemoaned in a 2011 episode of Family Guy.

For anybody who cherishes the authentic cinema experience, there is surely something awry when a full minute or more of screen time is taken up with intrusive corporate branding. Or is it just me?