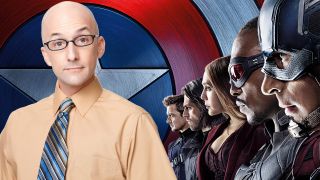 **Here be spoilers for Captain America: Civil War. If you haven't seen the film yet, and intend to, cease and desist all downward scrolling until you have. This won't make any sense 'til then anyway, so you'd be doing yourself precisely no favours**

One of the best moments in Captain America: Civil War comes right near the start. As Tony Stark leaves the stage after delivering a most philanthropic speech to the students of MIT, he’s followed by an enthusiastic but clueless Institute liaison pitching an idea for self-cooking hotdogs - the secret is a small thermal charge inside each one. The important thing, though, is that the bumbling educator is played by Jim Rash. ie. Dean Pelton from Community. ie. That brilliant but criminally under-watched sitcom that Civil War co-directors Anthony and Joseph Russo also work on.

Now of course, this could just be a case of colleagues and friends helping each other out. But I don’t subscribe to that pedestrian thinking. Given the educational setting and the monumentally familiar characterisation, I choose to believe that Dean Pelton - after a huge and miraculous career step up - is now canon in the Marvel Cinematic Universe, and that the man at the beginning of Civil War is the same well-meaning, pansexual imp who tried and failed to improve Greendale Community College so many times over.

This is undoubtedly a wonderful eventuality, but it is also one laced with tragedy. Because Civil War could have been so much better with more Dean. There are plenty of spots where a quick Pelton interruption would lift the film even higher. So many perfectly appropriate spots. Let me illustrate that with these Community GIFs.

When Cap starts sulking because half of his friends want him to sign up with the UN:

When Cap has just buried his old girlfriend, then spots her hot niece:

When they later end up kissing anyway:

When someone points out that it's a bit weird that the new guy dresses as a cat:

When Tony and Natasha casually mention that they're looking for new heroes:

When Tony tells Spider-Man that he's going to need a brand new outfit:

And let's not stop at Civil War

Six seasons of Community have shown that Dean Pelton is the gift that keeps on giving, endlessly and forever. For instance, if he ever makes it over to the X-Men after Marvel gets the rights back: