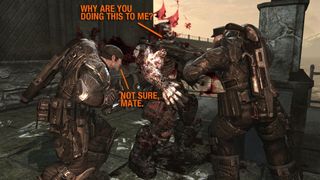 Although in video games we’re regularly fighting to save the world, there are also a few more feeble excuses used by our heroes to go on these grand, crazy and dangerous adventures.

“I may be a plumber, but hey, there’s a princess in trouble”. Mario, 1985. “My daughter is wearing a bikini, I’d better travel the world and beat up some strangers”. Bass Armstrong, 1998. So often we get riled up when video games get unfairly accused of having lacklustre plots, sub-par characters and more. But when you look at some of this lot, perhaps those criticisms aren’t as unjustified as they seem.

Check out these guys, who have the flimsiest, most bizarre motivations to risk their lives in video games.

Sonic (Sonic and The Secret Rings)

So, Sonic has a dream that someone is deleting pages of the Arabian Nights, and thats enough for him to put his own life - and the lives of his closest friends - at risk as he travels the world, jumping over precipices and stealing jewellery. Okaaaay. Not being funny, Sonic, but there are bigger problems in the world right now. If some jerk wants to deface a few books, let the librarians deal with them. At worst, they'll get a fine. Surely you've got better things to do Didn't Princess Elise tell you to put the bins out?

Fighting games don't need stories. Does anyone really care why two people are knocking seven shades of shit out of each other? Probably not. The very best motivation for fighting is either to a) win and get rich, or b) survive. However, as ludicrous motivations for violence go, surely Street Fighter 4's El Fuerte takes the prize. He's willing to break the bones of his fellow men and women to learn some recipes. Yeah, he's a chef: I get that. But seriously, just read some books, go on the internet or - if you want to get more local recipes - just travel the world without hitting people.

Willy is just a tired bloke, who wants to go to bed after a big party. For some reason, his housekeeper Maria wont let Willy into his own bedroom until he's risked his own life tidying up the various party detritus left lying around the mansion while dodging enemies. Hang on a minute. Why did Willy let his enemies into his own house? And why the f**k is Willy taking orders from the hired help? Willy pays Maria's wages. It's literally her job to clean up his house. So if he wants to go to bed after a party, and let someone else clear up the mess, then surely thats exactly what he should do.

Earthworm Jim is motivated by love. Ah, a noble sentiment, surely! 99% of games are about players competing for either love, money, or survival... so why is Earthworm Jim in this list? Well, it's never really clear why he decides to save Princess Whats-Her-Name. He's never met her; doesn't even know her. If the Duchess of Cambridge needed saving, I'd let the army do it. I'm sure she's a nice lass, but I've never met her. Plus, and I feel this is quite important: Jim is a worm in a suit. What possible future can he have with a Princess? I totally admire his grit and determination, but Jim's motives are questionable at best.

Another wonderfully bizarre fighting game story (and there are plenty in Dead or Alive) comes from Bass Armstrong. He joins the DOA tournament in the original game to make sure his 22 year old daughter, Tina, doesn't get hurt and because he doesn't approve of her wearing skimpy outfits and making money from beating up some dudes. His method of saving Tina from her terrible fate, is by dressing up in skimpy outfits, and making money by beating up some dudes. To top off the utter hypocrisy of his reasoning, Bass actually fights and beats up his own daughter during every DOA tournament. Nice one, dad.

The whole premise of 50 Cent: Blood on the Sand is ridiculous. In fact, it's so bad that it's actually good. Our Fiddy, along with G-Unit, play a gig in the Middle East (don't ask where, its the just the Middle East', ok?). The shady concert promoter has no money, so offers a mysterious diamond-encrusted skull as payment. The skull is subsequently stolen, and the rest of the game sees 50 and the gang committing genocide to reclaim the skull. Hmm... Is it really worth a) potential death, and b) committing mass murder, to reclaim an artefact that probably belongs in a museum anyway? Especially when Fiddy is a millionaire several times over? Would you even get that through airport security? Probably not. Seriously, just cut your losses, fly back home, and sell a few more baseball caps.

The intro to Super Runabout - and almost every justification for gameplay thereafter - makes no sense. Joe runs a delivery business in San Francisco. He's doing pretty well. One morning his niece steals her parents car (she's school-age, so shouldn't even be driving with consent), crashes it into Joe's garage, and announces that not only is she moving into her uncle's spare room, but that she's also going to become the manager of his business. What? The reasons for her sudden appearance, her wish to leave home, and her assumptions that she's qualified to run a small business are beyond tenuous - they're simply never explained. And the cherry on top? Joe just accepts all this and carries on as normal.

Treasure Island Dizzy is the classic tale of one egg's quest to lodge a compensation claim against a holiday company. You see, when Dizzy is on-ship, enjoying a cruise, he accidentally uses the spare leg of notorious pirate Long John Silver as a wicket during an impromptu game of cricket. When Long John discovers this, he gets (understandably) pissed off, and makes Dizzy walk the plank. This maroons Dizzy on a tropical island, and the rest of the game sees him attempting to return home to lodge his complaint. Seriously? Bloody Brexit.

A game as bonkers as Incredible Crisis, naturally, has a crazy premise. Essentially, its grandma Haruko's birthday, and her family have over-promised on the gifts they're planning to give her. Somehow, this leads to the main characters running away from giant boulders, becoming hostages, and getting involved in fights between the navy and UFOs. The insignificance of the main premise only serves to highlight the madness of Incredible Crisis 24 mini-games: it truly is king of the tenuous quests.

You wake on a mysterious planet, next to a broken down spaceship and an even more mysterious glowing orb that asks you if you’ll follow some random entity of the sky. It’s then a case of traversing through the galaxies, discovering new species, minerals, languages and planets.

But until you get very close to the centre of the universe, the whole thing just seems a bit pointless. Who are you doing all this for? There’s no-one even to brag to about all your galactic conquests or anyone to share it with. And didn't you intend to get a refund on this game anyway?