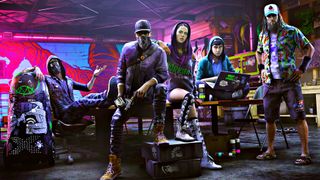 Skipping across the USA from noir-like Chicago to the sun-drenched grid of The City by the Bay was the best thing Watch Dogs 2 could have done. San Francisco is a giant colourful playground, and being dropped into the middle of it with an almost overwhelming amount of toys at your disposal feels like child-in-a-sweet-shop territory (albeit with a billiard ball on a stretchy string, and a really powerful stun gun).

Leaving Mr ‘I’m wearing a long coat and I’m surprisingly dull’ Aiden Pierce behind and replacing him with painfully cool hacker Marcus Holloway doesn’t hurt much either. While I didn’t spend too much time in cutscenes as I sacrificed story to spend two hours playing in Watch Dogs 2’s sprawling, tech filled sandbox, Holloway is significantly more entertaining. Add in the fact that I found a dog and he patted it and asked it if it needed skritches, and I’m definitely on his side. Just don’t tell anyone about the dog I accidentally made him hit with a stun grenade later on.

But onto the important bits. What is there to do in Watch Dogs 2’s San Francisco? Well, the good news is that no matter what you’re doing, whether you’re doing the story missions or any of the side quests, you’re constantly earning followers. Yep, welcome to the new millennium, millennials. Life ain’t worth living if you’ve got any less than 500K, even if you’re a hacking group that’s meant to be stealthily overtaking a big bad corporate technology conglomerate. Here’s what I got up to in my quest for social media fame.

Hacked other cars while driving

I thought hacking was a bit like Pokemon Go: not to be performed at the same time as being in charge of a vehicle travelling at high speeds. How wrong I was. Whereas previously Watch Dogs would allow you to only hack the odd water main or traffic light - which was cool but it’s 2016 and I want more than to change a blinking light - Watch Dogs 2 now positively encourages drive-by hacking.

A white thread that indicates tech you can tinker with goes haywire when you’re at the wheel and that’s because you can mess with pretty much every other vehicle on the road. Once you’ve decided on your car/victim of choice you can gain full control of both parked and occupied cars. A tap of the top face button on drives them forward, the lower will slam them into reverse and left and right will steer them respectively. I’ll be honest, initially trying this out made me crash as I completely ignored my own steering, but even an hour into the playthrough, it felt ridiculously stupid and satisfying to send the car in front careering off road at the tap of a button.

Got inventive with the drone

One of the many new toys that makes Marcus Holloway the coolest kid in hack school, the drone thankfully isn’t just something you’ll use once and then allow to gather dust on a shelf. With a quick press of a directional button, Holloway throws the drone into the air and you take control with the analogue sticks. The controls are significantly easier than a real life equivalent, with your triggers in charge of elevation and standard analogue steering.

The drone is easily my favourite tool in the game. Find a guarded stash of loot in the city - they’re scattered everywhere - and you can send in some eyes before you risk your pretty, baseball-cap wearing head. The drone is perfect for surveying the lay of the land, and you can also hack hazards like electrical wires and skip into nearby cameras for a better view. It’s easily possible to trigger an electrical box, attract the nearby guards and then zap them into a sleeping state, leaving you free to go in all smug and collect your spoils. I definitely did this without electrocuting a nearby dog. Sorry, Fluffy.

Tried on the Jumper for size

No this isn’t a piece of knitwear (although I did find a very fetching one with a squirrel on it in a shop near Union Square) - The Jumper is Holloway’s other remote control device. I have no idea how he manages to stow all this tech in that tiny rucksack, but after a quick tap of a directional button this little two-wheeled robot appears and Holloway sits down cross-legged to watch a screen. Just like the drone, you can send the Jumper into dangerous areas first to check things out.

There’s benefits to using this little device over the drone, too. If you’ve got physical terminals to hack, the Jumper can connect up directly. During a mission, I sent the device into a building unseen, hacked a grate to let it climb into the ventilation system and then sent it to turn off the security systems to let Holloway in the main door. It’s useful for using in guarded areas where there’s pick ups, too. Unlike the drone, it can lift up your cash so you won’t even need to set foot in the restricted area. Be wary, however: just like the Drone, if enemies spot the toys, they’ll shoot and throw stones, leaving you without your precious tech until it charges up again.

Did some hipster shopping and drank some coffee

You’re in San Francisco, what else are you meant to do? There’s obviously a massive corporation stealing people’s data, but Holloway needs his caffeine fix and you can wander into coffee shops for a quick hit. Then why not jump into a super hipster shop and buy yourself a nice shirt covered in donuts? There’s plenty of stores scattered across the world, so whether you want pastel coloured chic or a disturbing leather waistcoat with nothing underneath, The City by the Bay has you (sometimes indecently) covered.

Yep, Ubi is winking hard at you. One of the many mission types is entitled Driver San Francisco and there’s an app on your in game phone that’ll let you collect passers-by. The girl that jumped into my car was, of course, a YouTuber passionate about daredevil stunts. Thus she told me all about her subscriber count as we found the highest jumps in the city and launched the car into the air while she filmed the action. The car handling is somewhat floaty but I got used to it rapidly as I made the most of San Francisco’s hair pin bends to try out some handbrake turns. I imagine the daredevil is only one available option, and there’ll be plenty of these to distract you on the way to other things. Unlike its predecessor, it genuinely feels like you’ll be doing stuff like this instead of aimlessly walking the streets of Chicago, wondering where the fun is hiding.

Got to grips with drone racing

Of course it’s not just for spying on the evil doers of the city - the drone is a toy, after all. Scattered across the city are plenty of drone racing locations that require you to steer through a series of squares. These are in first person, making it much easier to see exactly where you need to go, and once you’re used to the elevation controls it’s a slick experience that’s definitely going to get significantly harder. My race was set up around the Palace of Fine Arts in Golden Gate park, which has been painstakingly recreated to look like the real thing, making it both a race and some pleasant sightseeing. Given that it’ll quickly descend into Batman AR levels of difficulty, I probably won’t be saying that for long.