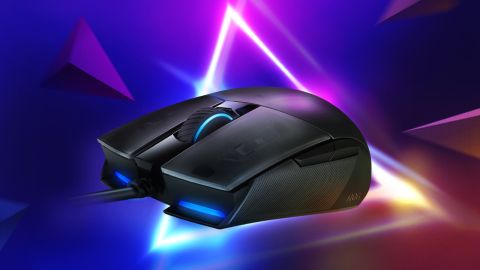 A mouse that is far too basic for the price point with a lack of features and just two reprogrammable buttons, although it has a sleek and stylish aesthetic

The ASUS ROG Strix Impact II may be a gaming mouse, but aside from the flashing LED that cycles through all the colours of the rainbow when in use, you wouldn't be able to tell just from looking at it. This inconspicuous piece of kit goes for style points over a slew of programmable buttons, but is it worth the £50 price point over the plethora of devices already on the market?

Perhaps the biggest drawback to the ASUS ROG Strix Impact II mouse is the 6,200 DPI optical sensor. This is considerably lower than most other high-end gaming mice which usually have a DPI of 10,000+, and that makes it one less than ideal in competitive games. However, it's worth noting that this is an increase from the previous ROG Strix Impact mouse, which only had 5,000 DPI.

As you'd expect, there are two reprogrammable buttons on the left-hand side of the mouse. Download the ROG Armoury application and you can edit the function you want them to perform, along with RGB lighting to match your setup. Standard gaming mouse stuff, then; nothing extraordinary, but it covers the basics.

With a matte black finish and a slightly translucent top, the reasons for this mouse costing so much aren't immediately clear. As mentioned above, the most distinguishable feature is the neon light that shines through both the scroll wheel and the ASUS ROG logo, along with two small headlight-esque strips either side of the cable at the front. When in use though, most of the lights will be obscured.

Using the Strix Impact II feels absolutely effortless thanks to it only weighing 79g, although the small build may hinder those with larger hands. And while the cable feels strong, it's got a rubber casing instead of a braided one so isn't as tough as some gaming mice, and therefore is more liable to damage over time. Also, perhaps the most questionable decision is that the DPI button lies on the underside of the mouse, making it impossible to alter on the fly (much like the otherwise-excellent Razer Viper).

There's no avoiding the fact that the Impact II – despite marketing itself as an upmarket gaming mouse – is lacking when it comes to features and design. Sure, it does the job and has an element of customisation, but two reprogrammable buttons doesn't quite cut it for a competitive mouse in online gaming today. The best gaming mouse should have more utility.

On the other hand, the pivoted buttons do ensure that the travel time per press is minimal, allowing for almost instant clicks. When playing games like PUBG and Call of Duty: Modern Warfare, this is certainly noticeable compared to some other mice I've tested, but is it so crucial that it's worth paying this much for?

The Impact II might be a noticeable upgrade over the first iteration in this range but, simply put, it's not good enough to compete with all the excellent gaming mice on the market right now like the Logitech G502 and Roccat KONE. Only having two reprogrammable buttons is a severe drawback in this day and age, especially when it's priced at £50.

Yes, it's impressively ergonomic and smooth to use, but the fact of the matter is there's not enough here to make it much better than a high-end office mouse. It's not terrible and does the job, but there's no reason to opt for this at such a high price-point when there's a plethora of others on the market right now.

A disappointing and surprising release from ASUS, in other words - a brand that you can usually rely on to release quality products.

A mouse that is far too basic for the price point with a lack of features and just two reprogrammable buttons, although it has a sleek and stylish aesthetic