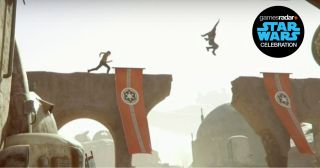 While the brief teaser of EA's Amy Hennig helmed Star Wars game actually had a lot of clues hidden in it, we now have word from the senior creative director herself on what shape the game is taking.

Speaking at this weekend's Star Wars Celebration Amy said that she and her teams were "writing an original Star Wars story with new characters, locations, tech, new creatures".

It's part of the reason behind the close relationship between Visceral and  LucasArts. For example, she mentioned that The Force Awaken's concept artist Doug Chiang is the game's art director ("lucky me, right?"). The studio has also been working closely with LucasArts story team and meeting regularly create the new story.

The close relationship is because this new game will be the first in a while to add new content to the universe and, as Amy explains, "all of it has to sit authentically alongside what people know now."

In terms of creation Amy describes the new game as taking a similar shape to another famous series she previously worked on. "The process I’ve been using is very similar to what I did with Uncharted, which was: if you are trying to recreate a familiar classic, in that case, old action adventure experiences, you need to deconstruct the films in order to reconstruct them in an interactive context as game play".

The two images shown at Celebration do have a very Uncharted feel to them and seem to suggest potential co-op play.

One of the key concepts Amy singled out was the idea that Star Wars films are always an ensemble cast. The first film, for example, is "as much Leia’s, or Han’s, or Vadar’s story as it is Luke’s. The same thing is true of our game. It’s not a lone wolf story. The characters have to be a coordinated ensemble, acting in the moment and in parallel. Like the Death Star escape for instance. Everybody does their part".

Whatever happens Amy says, "the end goal is that by the time the player finishes playing they felt like they really did play a Star Wars film". Unfortunately, we won't be finding out much more a while: "we’re probably going to go dark for a little while because we’ve got a little work to do" say Amy, but teases that "we’re excited to show you guys something next year".

Seen something newsworthy Tell us!