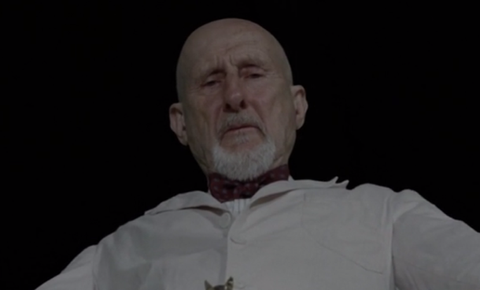 THE ONE WHERE The truth about “Anne” and Dr Arden is revealed, Lana escapes from Briarcliff – but gets a nasty surprise – and Kit is arrested.

VERDICT Wow! So now we know the truth. The truth about Arden, about “Anne Frank” and – most satisfyingly – about the mysterious Bloody Face. This episode streamlines the season's tangled mysteries, while putting a new spin on the grim events of last week.

So, Anne Frank is really a mentally ill woman called Charlotte Brown who had a breakdown and became fixated with Frank's life. Not a huge surprise – her story to Jude last week was a bit bonkers, after all. But that doesn't mean she wasn't right about Arden, though – the last shot of the episode is a photograph of Hitler with Arden (or rather Hans Gruper as we found out last week) stood at his side. I don’t quite buy Sister Jude backing off so easily though. At the start of the episode she’s convinced that he is a war criminal, and eager to take him down. But on hearing about Anne/Charlotte's breakdown, she simply backs off. Jude is a dogged and often vicious woman and Arden is her nemesis – there's no way she'd let something like this drop.

We get a lot less Shelley this week (literally two scenes, both of which involve her crawling along and gurgling a bit), but she seems to have fully transformed into a “rasper” now. The scene where she crawls up the steps towards a group of school children is nicely eerie – particularly because it takes place outside in broad daylight. We do, however, get a good bit more of Sister Eunice. The demon has clearly learnt to dial down her more outlandish tendencies; it’s a more controlled, manipulative character that we see this week – and all the creepier for it.

But my favourite aspect of this episode had nothing to do with the various shocks and revelations; it was the tremendous sense of visual style. Last week we had black and white “newsreel” style flashbacks for Arden. This time around we get Anne/Charlotte's story in wobbly, warped VHS-o-vision. It's a neat effect, with the colours washed out, a creaky theremin soundtrack and a couple of crash zooms giving it a strange b-movie texture. Elsewhere there are some lovely visual flourishes. The zoom in on Arden stood, enveloped in darkness, overlooking his empire, has a lurid giallo feel to it, while the very next shot, his shadow cast on the wall while Charlotte cowers in fear, is beautifully framed. Hats off to director Alfonso Gómez-Rejón for making the best looking episode so far.

BLOODY FACE So it was Dr Thredson all along. Ha! Totally called that one way back in episode two. To be fair, he was always the least likely suspect – and therefore the most probable. The scene where he takes Lana back to his home-cum-slaughter house is another woman-in-peril scene (this season's recurring motif), and extremely creepy. With this revelation in mind, the aversion therapy scenes last week are even more disturbing than we thought.

Kit's fate – arrested for the murders he didn't commit, and potentially facing the death penalty – is also neatly handled. Thredson's manipulated everyone in Briarcliff to his own cruel ends.

THE ALIENS They're back. They abduct Grace and appear to carry out the sterilisation ordered. Are they working with Arden? And who was Alma, the pregnant woman who Grace saw while in the white void.

HMM, THAT SOUNDS FAMILIAR… Sam refers to Operation Paperclip, the OSS's program to recruit Nazi scientists after the war. If it's ringing any fanboy bells, that's probably because it was prominently featured in The X-Files third season.

WHO ELSE...? Thought of Die Hard and Hans Gruber when they heard Arden's real name?

BEST LINE
Sam Goodman on Arden: ”If he is who you suspect, the last thing you want to do is corner him...”