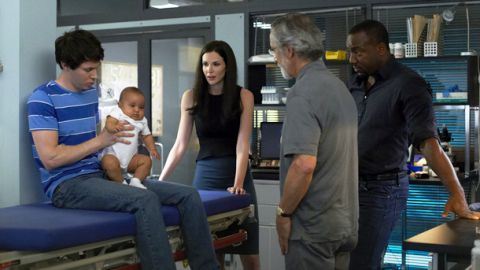 THE ONE WHERE The team deals with the fallout from Dani's death, and Gary is left holding someone's baby.

VERDICT Things are downbeat as hell in Alphaville this week in the wake of Dani's explosive exit, and all told it made for irritatingly average television. If anything, the team's reaction to Dani's demise simply highlighted how little the character mattered. Rosen and Hicks aside, nobody else seemed particularly bothered, past a few mumbled platitudes early doors.

That would have been fine if there had been something else going on of interest in this episode, but unfortunately that wasn't the case. The arrival of baby Adam and Gary's adoption of him should have been loads of fun – Ryan Cartwright has proved his comedy chops time and time again – but it fell painfully flat. I was expecting antics, shenanigans, hilarity of some kind, but in the event, none of that happened. Instead, we were treated to a remarkably normal, switched on Gary looking after a baby with impeccable daddy-skills, and refusing to crack wise about it.

There was never any hint of real danger about the new born, the mystery behind his appearance (and his so-called parents for that matter) was paper thin, and the whole thing felt like a heavy-handed attempt to be all deep and meaningful about Dani's death. Whatever profound point the writers wanted to make about the sanctity of life and the importance of protective parent figures, it fizzled out way before the credits rolled.

With Rosen off coming to terms with getting his daughter blown up, and Hicks an emotional wreck, it should have been easy for Alphas to elicit some sort of basic emotional response to last week's events, but it simply doesn't happen. Rosen's mourning period included picking a coffin, being interviewed by government agents (via an incredibly clunky framing device) and snooping round Dani's flat. At least Hicks looked like a wreck. In fact, the only genuine glimmer of actual heartache in the whole episode came when Hicks asked Nina to push the memories of Dani away.

For some reason, this episode was also chosen to be the one in which Rachel and John get their tedious freak on, a baffling piece of decidedly un-sexy sex that went against everything we know about Rachel's Alpha abilities. She's supposed to be in possession of super senses that, lest we forget, were greatly magnified only a few short weeks ago by exposure to Stanton Parish's mind-ray device. The prospect of John's stinky disco stick getting anywhere near her should have put her into full-on sensory overload, but instead she zoned out for a bit, and then was suddenly able to have all the freaky monkey sex she desired. I still can't see what the point is of this relationship, and now it appears to be changing character powers at a whim just to suit its tedious needs. Come on Alphas , you can do better than this...

Alphas season two is currently airing in the UK on 5*, Tuesdays at 10pm