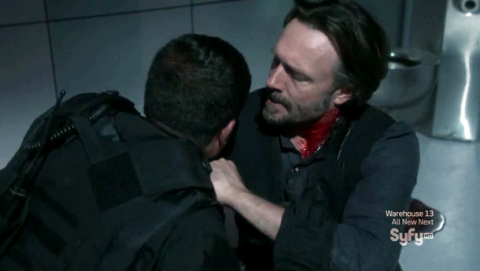 THE ONE WHERE An Alpha that Rosen awoke from a coma has found his telepathic abilities greatly increased.

VERDICT Look everybody, the kid in the slightly rubbish hospital horror episode a couple of weeks ago was important! That’s right, poor comatose Jason Miller (Connor Price), fell victim to Stanton Parish’s bizarre hospital equipment scam, amplifying his powers and turning him into the most popular boy at school. Sort of.

Jason’s creation of a high-school hive mind was an early highlight in the episode, creepy and weird in all the right places. The hive’s tendency to swarm in order to protect its leader made the threat implied in Jason’s powers clear, although he didn’t appear that much more dangerous than most other rogue Alphas-of-the-week. I certainly didn’t feel that Rosen’s team couldn’t have handled it without Stanton Parish’s help.

But really, that was all a great big MacGuffin. Rosen and Parish’s battle of wits was at the centre of this episode. It’s testament to John Pyper-Ferguson’s performance as never-aging warmonger Parish that it’s so easy to forget how dangerous he is. All that charm, grace and intelligence is poured on so thick that when Parish does something genuinely alarming it’s like being hit with a frying pan.

Of course, I’m talking about his incredibly creative escape attempt, probably the most violent use of a plastic cup in recent memory. Desperate measures for desperate times was a recurring theme of the episode, and once again we were reminded of just how far Parish is willing to go. He’s lived more lives than any of use, and he knows how to get what he wants. Perhaps more importantly, he doesn’t care who he hurts in the process.

Unlike Doctor Rosen, of course, who almost always hurts people but never means to. Rosen felt a bit ineffective this week, even during the finale in Jason’s head, to the point where I couldn’t quite understand why Jason had listened to him.

Rosen’s realisation that it’s his daughter who’s been putting his team in jeopardy should put some lead in his pencil though. He demonstrated a father’s instinct to protect her this week, but how exactly will he deal with her betrayal? Stop her allowance? Ground her for a month? However he approaches it, there should be fireworks.

UNEXPECTED GEEK REFERENCE OF THE WEEK Turns out Hicks is a Next Generation fan, comparing Jason’s hive-mind antics to the Borg.

BEST LINE
Stanton Parish: “Desperate men do just about anything.”

Alphas season two is currently airing in the UK on 5*, Tuesdays at 10pm