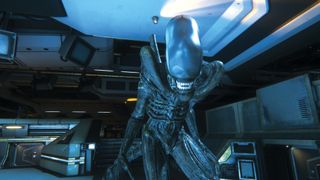 If you didn't already know Alien: Isolation was coming to Switch, you'd best start steeling yourself now for round two of Amanda Ripley vs. Xenomorph, this time with the added benefit of portability, as Creative Assembly's excellent survival horror game arrives on Nintendo's console later this year.

It sounds Isolation, one of the best horror games of the generation, is coming pretty soon, in fact, as the title (already available on PC, PS4, Xbox One, PS3, and Xbox 360) has been rated by the ESRB for the upcoming Switch port, which is usually a strong indication of a title going gold, ready for an imminent launch.

You can find the rating on the ESRB's website here which, unsurprisingly, lists Alien: Isolation as M for Mature, as a result of its frequent use of "Blood, Strong Language [and] violence." If you needed any more evidence that Feral Interactive (the studio porting the game to Switch) won't be sanitising Isolation's potent mix of horror and violence, check out a further description of the game from the ESRB below.

"When Ripley is spotted by an alien, a short cutscene depicts her getting knocked down and bitten in the face, or stabbed through the chest with a spike. Blood is depicted when players are impaled; several corpses can be seen lying in pools of blood during the course of the game."

Ah, yes, it's all bringing back the memories now. Hopefully we'll get an official announcement about Alien: Isolation's Switch release date soon, as it's currently listed with a hazy 2019 window, but this rating suggests it could be in our hands within the next few months, if not weeks.

For more, check out all of the best Nintendo Switch games you can play right now, or watch our Release Radar video below for a guide to everything else out at the moment.