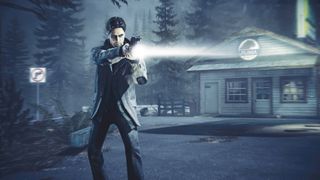 Alan Wake rejoined the Microsoft Store sometime in mid-December of last year, more than two years after it was removed due to expiring music licenses.

In May 2017, Remedy pulled the title from both Steam and the Microsoft Store because a number of music licenses were near-expiration. By a number, I mean all of them, including songs that were hand-picked to lay during each individual episode's finale. The game's soundtrack was great, featuring music from Nick Cave and the Bad Seeds, Roy Orbison, and The Black Angels - but that greatness was ultimately its demise. At the time, Remedy looked into relicensing the tracks, which it eventually did, re-adding the game to the Steam store in October 2018. At the time, it was 80% off when it re-joined Steam, selling for just $3 for a few weeks.

Big thanks to our partner and Alan Wake’s publishers @Microsoft who were able to renegotiate the rights to the licensed music in Alan Wake, so that the game can be sold again.October 25, 2018

But for some reason, Alan Wake never rejoined the Microsoft Store's listings, which meant Xbox One players could only enjoy the game by purchasing a physical copy. A VG247 article about Alan Wake reappearing on Steam stated that it was coming to Xbox "soon". Well, 15 months later and it's here, according to TrueAchievements.com, and it's listed on the Microsoft Store for $19.99.

It's incredibly rare to see this kind of thing happen in the gaming industry, at least when it comes to music licenses. Back in January 2018, all Transformers games were pulled from digital marketplaces after Hasbro's licensing agreement with Activision expired. Activision is somewhat familiar with this process, however, as they lost the James Bond license in 2013 and had to pull Blood Stone, GoldenEye, and Quantum of Solace from stores. The company has also had to remove Marvel and Teenage Mutant Ninja Turtle games.

It's great to see Alan Wake back, and here's hoping music licensing won't take it from us again in the future.

Oh, and a Control movie by Rogue One writer Gary Whitta has Remedy's approval, so get ready.