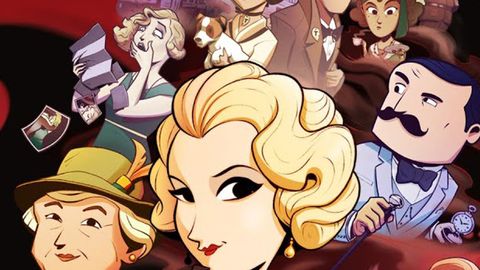 Although it doesn't always make the most of its theme, Death on the Cards is a fast-paced game of tactical bluffing that's well worth your time - particularly to kick off games night.

Agatha Christie's Death on the Cards asks a simple question: how do you get away with murder? By being a sneaky git, according to this social deduction card game. Someone around the table is responsible for a crime most foul, but their identity is unknown. They're also working behind the scenes to derail your investigation. That deviousness makes Death on the Cards a lot of fun. The thing that makes it even better, though? The fact that you don't need a good poker face to win - tactics are more than enough. As someone who's terrible at bluffing, this is music to my ears.

As you'd expect from a whodunnit, your goal in Agatha Christie's Death on the Cards is to catch the murderer (or escape, if you're the culprit). And because you need to collar them before the game's deck of cards has run out, you'll use beloved sleuths like Poirot and Miss Marple to make that happen.

The problem is, you all have something to hide. In this case, very literally; players receive three 'secret' cards at the beginning of the game that only they are allowed to see. Although most of these are tongue-in-cheek misdemeanours (you lied about being heir to a made-up kingdom, for example) one person's hiding the fact that they're a cold-blooded killer. As such, players have no choice but to air each other's dirty laundry if they want to catch the murderer before they make good their escape.

Unfortunately, innocents who have every secret revealed are plunged into 'social disgrace'. Besides being wonderfully old-fashioned, it means they're out for all intents and purposes. This is where Death on the Cards gets really interesting: those mechanics demand that players aggressively protect themselves, and nothing makes someone seem shiftier than relentless self-preservation. Mistrust is the currency this game trades on.

Such paranoia gives the game its edge. Who's telling the truth? Who's trying to pull the wool over your eyes? It lays the groundwork for satisfying 'aha!' moments. Because the killer will also be doing their best to turn everyone against each other, you're in for a tense half-an-hour or so where the gloves come off. Getting to that point can be hard work because the rules take a while to understand, compute, and log in your brain, but it's a worthwhile investment overall.

As you'd expect from a game with Christie's name on the cover, P.Is such as Hercule Poirot are key to blowing this case wide open. Taking the form of detective cards that are built up over time, collecting a full set forces others to show off a secret card. However, they're far from the only tool at your disposal. In fact, there are plenty of underhand ways to uncover skeletons in the closet. That includes events which let you point your suspicions, swap cards, or slow down the killer's escape by reusing cards from the discard pile. They're all amusing and encourage tactical play, but one of the coolest/cruellest ways of cutting to the heart of the matter is a 'devious' card. You slip this to another player, forcing them to unveil a secret immediately. It's very mean, and therefore brilliant.

And that's the best bit about Death on the Cards: even though bluffing plays its part, the core loop is strong enough to keep you engaged no matter whether your poker face is good or not. As with so many of the best card games (or the best board games, for that matter), it's very scalable as a result. For example, two-player games are still engaging because the focus is on scuppering your opponent's plans rather than unmasking the villain (you already know who they are, after all). Meanwhile, larger matches add layers of their own via an accomplice who helps the murderer.

Basically, it's a fun game even if you can't keep a straight face. Yes, there are criticisms I could level at Death on the Cards. Namely, it misses a trick by not delving into who has been killed, and there's only one generic piece of artwork to represent each secret. But the meat of the game? That's strong enough to, for lack of a better word, get away with murder.

Although it doesn't always make the most of its theme, Death on the Cards is a fast-paced game of tactical bluffing that's well worth your time - particularly to kick off games night.