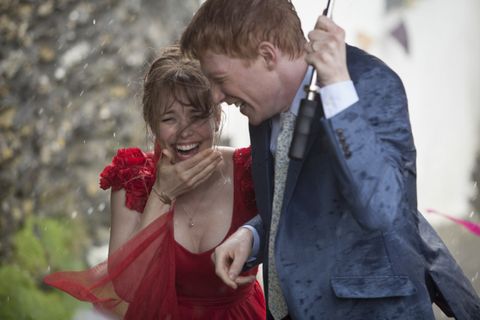 The impossibility of time travel must be galling for Richard Curtis. But then, who needs to jet back 20 years and make Groundhog Day before Harold Ramis when you can just remake it and hope no-one spots the crib?

The conceit of Curtis’s latest is that the men in the immeasurably lucky Lake family have the inexplicable power to travel back within their own timelines. Screw up a first date? Easy, just rewind four hours and start again. And again. And again. The Butterfly Effect? “Don’t worry about it”, Dad (Bill Nighy) informs young Tim (Domhnall Gleeson) as he hits his 21st birthday. You can’t help be reminded of Basil Exposition’s speech to Austin Powers in the nonsensically time-swivelly The Spy Who Shagged Me , where he tells him not to worry, “just enjoy yourself.” It’s a cop-out line that suggests a detestably low regard for your audience.

About Time ’s SF trimmings may be new toys for Curtis, but most of everything else is reassuringly still in place. Whether you can stomach the film will have a lot to do with your tolerance levels for Planet Curtis; whether you want to hug these characters or throttle them. Of course it’s a perfect London, one where love is all around, and naturally it sounds like it was soundtracked from a compilation CD picked up at a service station. That’s fine - it comes with the territory. But there’s a first draft raggedness to About Time that there wasn’t to Four Weddings or Notting Hill. Tim’s love story with the lovely but underwritten Mary (Rachel McAdams) is vapid and uneventful even by Curtis’s sunny-hearted standards, and there are holes in the plot you could drive a lorry-load of Agas through.

About Time isn’t vintage Curtis. It’s overlong and undercooked and barely raises a titter. And for demanding, SF-literate viewers, the liberties taken will infuriate.

For an alternate perspective, read our About Time review from the theatrical release.
Read more of our DVD reviews .