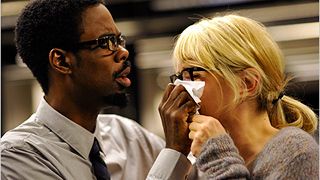 The result does the job capably enough, especially if you have fond memories of Delpy’s dalliance with Adam Goldberg five years ago – or the Before Sunrise / Sunset diptych with Ethan Hawke, to which it owed so much.

Yet it all seems so formless and random you’ll wish there were a steadier hand on the tiller, something that might have been achieved had its star, director, co-writer and co-producer not multi-tasked to such an extent. Marion, Delpy’s scatty alter-ego, has moved on a touch since her last appearance, having since traded Goldberg for talk-radio host Mingus (a restrained Chris Rock).

Yet a visit from her kooky dad (played by Julie’s real-life père, Albert), her flirty sister Rose (Alexia Landeau) and the latter’s feckless, pot-smoking boyfriend, Manu (Alex Nahon), soon puts le chat among les pigeons, coming as it does ahead of her scheme to flog off her soul as part of a wanky conceptual art piece.

Rock’s role is to largely look on slack-jawed and uncomprehending as his in-laws invade and disrupt his ordered universe. With only so much culture-clash material to work with, Delpy is forced to venture into more surreal territory – most notably in the scene where she tries to buy her soul back from Vincent Gallo, essaying himself in a gag you’d probably have to be a divisive auteur yourself to fully appreciate.

What it all adds up to is an anything goes take on modern relationships with a side order of broad stereotype. Expect to be amused and bemused in equal quantities and you’ll be amply entertained.