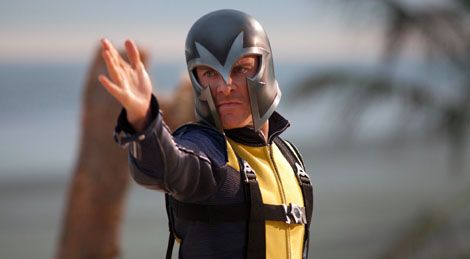 Kevin Bacon as a mutant Nazi! Rose Byrne in her pants! Nicolas Hoult done up like Sully from Monsters, Inc! And these aren't even the best things about Matthew Vaughn's vibrant, sprawling, ensemble origin story (well, maybe the Bacon bits...).

A franchise reboot reminiscent of JJ Abrams' 2009 Star Trek overhaul, this is the fifth film in the X-Men canon and even if it can't quite match Bryan Singer's X2 (among the finest of its kind), First Class is still fast, fresh and fun.

It's intelligent and emotionally resonant, explosive and eye-dazzling. Factor in a zeitgeisty, hot-list cast and First Class is likely to be one of the summer's best biggies. It sure as hell razes Brett Ratner's disappointing X-Men: The Last Stand (which Vaughn was slated for at one point) and Gavin Hood's time-waster Wolverine.

Poland, 1944: a young Erik Lehnsherr is separated from his parents in a concentration camp; meanwhile, in an affluent but isolated stately home in New York a young Charles Xavier happens upon a strange blue little girl who's able to disguise herself as other people.

Their paths cross in the pursuit of former Nazi Sebastian Shaw (Kevin Bacon), a ruthless mutant supremacist plotting to use the Cuban Missile crisis to provoke a war among humans.

Extensive globe-trotting (Argentina, Russia, America, Switzerland, Poland, the UK) in a Cold War context lend this the feel of a '60s espionager.

But at heart First Class is the story of how close friends become bitter enemies and of how Charles and Erik become Professor X and Magneto.

Heard this one before? Whether it's Clark Kent and Lex Luther or Peter Parker and Harry Osborn, the 'frenemies' angle is a well-worn superhero staple. But strong, sympathetic performances and bromantic chemistry between dashing, dangerous Erik and compassionate humanist Charles inject fresh heft.

An early scene sees Erik in an Argentinian bar toasting then torturing two Nazi associates of Shaw with a single-minded menace reminiscent of Inglourious Basterds' opener.

Yet the sequence occurs before he's ever met Charles, and the possibility of redemption that this relationship brings is all the more affecting when played to its conclusion.

Meanwhile, the sea battle that crescendos the action doesn't fail to thrill.

As for the supporting cast... it looks like the Six Degrees Of Kevin Bacon game just got a whole lot easier. Jennifer Lawrence (Oscar-nommed, just snagged the lead in The Hunger Games) brings vulnerability and Winter's Bone stoicism to shape-shifting future-Mystique, Raven, while Nicholas Hoult (BAFTA-nommed, the lead in Singer's next film Jack The Giant Killer) adds sensitivity then rage to brainbox-turned-Beast Hank.

Her intro is a highlight too, with a pissed-up Erik and Charles checking her out in a strip joint.

Strangely, it's the mutant enemies who feel underplayed.

Vaughn regular Jason Flemyng's devilish Azazel, weather-bothering Riptide (Alex Gonzalez) and even Mad Men sizzler January Jones as icy Emma Frost are denied a backstory - and in the case of Flemyng and Gonzalez any real dialogue.

There's a lot of ground to cover to give the gang a chance to stretch their legs (wings, feet, etc), but fortunately Jane Goldman's tight script and Vaughn's zip and pacing (abundant in his brilliant anti-superhero Kick-Ass, where he also teamed with Goldman) mean the balance between big set-pieces and character business is deftly held.

If First Class doesn't quite achieve the anarchy and irreverence of Kick-Ass it's partly because this is a different beast - not lacking in charm and wit, but occasionally in danger of veering towards broader laughs.

This isn't one for tots, though - carrying the same 12A rating as The Dark Knight, it mirrors Christopher Nolan's unwillingness to shy away from scenes of cruelty too bleak for infants.

"Mutant and proud!" asserts a naked, blue Jennifer Lawrence, in the closest X-Men: First Class gets to a catchphrase. She could be talking about Vaughn's film, which takes DNA from Singer (back in the fold as producer) and Marvel and mixes it with Bond and Batman, bromance and coming-of-age angst to create a cool, character-driven actioner with a social conscience that's something to be proud of. Top class.