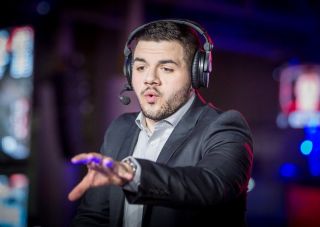 While he's not quite as controversial as some other streamers and influencers, there's a lot to learn about CouRageJD. If you're wondering who the man is, what his real name is, how he got his big break in streaming and more, you've come to the right place. This guide has everything you need to know about CouRage and answer the one very simple question: who is CouRageJD?

Jack Dunlop didn't start his career as an influencer; he initially became interested in esports back in 2007 with the Halo scene, quickly becoming acquaintances with some players and casters. Thanks to his friendship with Chris Puckett of MLG hosting fame, he began an internship at MLG in 2014, before moving on to the Call of Duty World League to commentate over matches as a caster. During this time, CouRage slowly built up a social media following, and in February 2018, he decided to leave his casting days behind him in order to focus on being a content creator full time.

CouRage can often be found streaming with people like Ninja (who is Ninja?), TimTheTatMan, Dr Lupo, Dr DisRespect (who is Dr DisRespect?), and more. He also befriended a 10-year-old boy called Connor while playing Fortnite, and after speaking with Connor's parents, helped him to set up his own YouTube channel and stream. Alongside a couple of other younger kids, he often refers to them as his "10-year-old army" when they play Fortnite together. It's also a running joke that he has an obsession with Ariana Grande – more on that below.

We’re thrilled to officially welcome @CouRageJD to 100 Thieves as the third creator for our content house. With a background in pro gaming and casting, CouRage brings an extremely unique charisma and dynamic to our team. We’re beyond excited to have him part of 100 Thieves! #100T pic.twitter.com/TQyTizONPcMay 28, 2019

2014: Joined MLG through an internship.

November 2015: Moved over to the Call of Duty World League team as a host/commentator.

April 2018: Matched with Connor in a random duos game and helped him to his first ever victory royale.

May 2019: Joined 100 Thieves as a full time content creator, as his friend Matthew "Nadeshot" Haag is CEO.

June 2019: Participated in the 2019 Fortnite Pro-Am event with Brendon Urie of Panic! At The Disco fame.

August 2019: Released a parody of Ariana Grande's Boyfriend music video with her permission, then met her at the end of the video and she referred to him as her boyfriend. It's important to note that they're not actually dating and since then, CouRage has started dating somebody else.

November 2019: Agreed a contract with YouTube to stream exclusively on there instead of Twitch.

It became an open and self-deprecating joke on his stream that CouRage would never be able to get a girlfriend, which led to people suggesting he should try and date Ariana Grande. He tried to get her attention for some time, even asking her out on a date via Twitter, but she didn't notice him until she eventually followed him back in February 2019.

The pair eventually met in May 2019 when he was invited backstage at one of her shows alongside Nadeshot, then in August 2019, he recorded and released his version of her music video, Boyfriend. She replied to his tweet, along with featuring in the end of the video. Now CouRage is dating Maddie, it seems like the CouRage x Ariana saga is over for the time being.