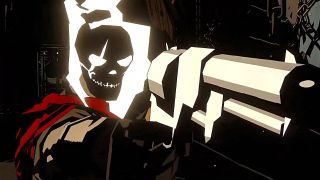 West of Dead had a beta on Xbox three months ago, and today it’s returned for another bar brawl. The Ron Perlman-voiced title combines western and mystic elements in one isometric, roguelite, twin-stick shooter where every room of the procedurally generated levels is another opportunity for a good old-fashioned shootout.

While all the other cowboys in your way take vaguely undead forms, your anti-hero, WIlliam Mason, is one monstrous son of a gun, flaming skull for a head and all. So it goes when you’re trying to shoot your way out of Purgatory, Wyoming. Ron Perlman’s dulcet tones are the perfect accompaniment for the moody shooter, as he waxes poetic and tears through enemies in equal measure like Max Payne in cowboy boots. You’ve got to admit it’s nice to hear that signature voice somewhere in video games other than the reveal trailer of every Fallout game.

West of Dead was previously revealed at X019 and its first beta was briefly included in the Project xCloud games library last November. It’s not in there this time, but you can play it the more traditional way by downloading it on your Xbox. Neither Microsoft nor publisher Raw Fury have said for how long the beta will be around this time, but we do know that when it launches in full later this year, it will hit Xbox Game Pass on day one. If you need to know more about the ghostly shooter, our pals at Edge recently debuted a lengthy feature on West of Dead.

For a look at what else is in Microsoft’s subscription library, here are the best Xbox Game Pass games.