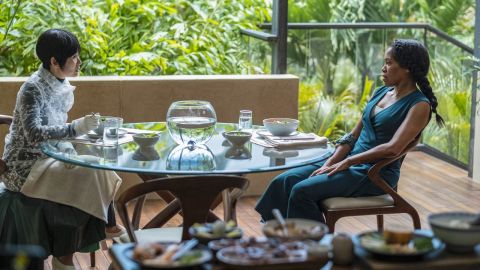 A solid, if unspectacular follow-up to last week's jaw-dropping episode – but one with a final twist that will no-doubt shake everything up once again.

After last week’s black-and-white origin story masterclass, Watchmen episode 7 has the unenviable task of following up one of the best episodes of television this year. And it knows it. As such, “An Almost Religious Awe” is a cooling-off period that amounts to primarily place-setting for the series’ grand finale. Even so, a half-cocked Watchmen is still more engaging than the vast majority of the shows currently on television – and it comes coupled with a final twist that will make the wait until next Sunday even more painful than usual.

Watchmen’s attempts at world-building have been nothing short of spectacular. Ever since Wade Tillman’s awful night in New Jersey, the show has slowly but purposefully delved into the past to help not only enrich these new characters, but also those of the comics as a whole. It’s the same again with the younger Angela’s flashback scenes in Vietnam.

The intermingling of memories from Angela’s Nostalgia overdose with her witnessing the traumatic deaths of both her parents and grandmother helps elevate Regina King’s performance even further. Her lost, scurrying eyes are no longer as simple as Angela merely being a detective on the hunt; there’s a lot more going on behind the mask, both literal and metaphorical.

Watchmen has an unerring knack when it comes to revealing more about these characters, and the delayed ‘gotcha’ at the episode's conclusion allows us to finally empathise with the once closely-guarded Angela. King doesn’t get to do much other than stumble about helplessly in a fugue state for the majority of the episode, so it’s a testament to the flashbacks that her character still evolves throughout the course of the hour.

Another person on the hunt for answers is Agent Laurie Blake. Thanks to Angela’s Nostalgia-fuelled mutterings, she’s able to piece together what we found out last week: Judd ‘killed himself’ thanks to Will Reeves’ brainwashing. Laurie tells Mrs. Crawford the news, adding that she suspects Joe Keene of leading the Seventh Kavalry. Instead of a tension-heavy showdown, all pretence is thrown out the window. Mrs. Crawford confesses and drops Laurie down a trap door – a device even the FBI agent finds hackneyed upon waking.

As twists go, it rings slightly hollow. This, followed by Keene meticulously laying out the Kavalry’s master plan to capture Doctor Manhattan, feels like it’s been ripped straight out of a Golden Age comic panel that Moore was busy critiquing decades earlier. As a plot device for the audience, it’s useful, but feels out of step for a group that’s mostly kept to the shadows so far. Unless the reveal was a comment on the pig-headedness of the villains and their lack of a Veidt-esque plan that would have already gone off without a hitch 20 minutes ago, it feels like a strange, cliched addition.

Another slightly disappointing – but still ultimately entertaining – element is the Trial of Adrian Veidt. It’s as wonderfully Lynchian as ever, with everything from Jeremy Irons passing wind to a jury of literal pigs, with one squealing a supposed guilty verdict. It's at once hilarious and utterly absurd but arguably feels too divorced from the quick-hitting, forward-thinking plot on Earth. I was left wondering how the pieces are all going to come together. Veidt has just two episodes left to get home – if he will at all. And if not, what was all this for?

Then there’s Looking Glass. The cliffhanger from two weeks back resolves itself off-screen. While it’s perhaps more effective not seeing Tillman escape, leaving a trail of Kavalry bodies in his wake, it would have been nice to see exactly how he overcame seemingly impossible odds. Yet, Looking Glass is now that rare thing we haven’t encountered so far: a wildcard; an unpredictable element among duelling plans from Trieu (who is about to activate the Millennium Clock) and the Kavalry’s Manhattan-baiting scheme. Like Rorschach in the original comics, he’s going to be the one who’s not so much another piece on the playing board, but the one who could knock it all over. It’s a nice set-up – and his two-week absence means his eventual return will be far more impactful. Great work all-round – and all from a two-minute scene with just a handful of lines between Angela and Petey.

It’s the final moments, though, that will have everyone talking. We discover, thanks to Lady Trieu’s exposition-heavy monologue, that Doctor Manhattan has been disguised as a human on Earth this whole time. Angela walks out without a word and goes home to talk to her husband, Cal. After some back-and-forth, she seemingly murders him – but it’s not all as it seems: Cal was Doctor Manhattan the whole time. As decisions go, bringing the blue-hued god is back in the picture this late on can only bode well for a series that’s fast entering the conversation as one of the greatest in years.

A solid, if unspectacular follow-up to last week's jaw-dropping episode – but one with a final twist that will no-doubt shake everything up once again.