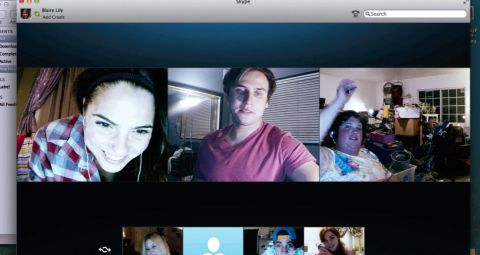 The all-Skype gimmick that drives this very modern horror is effective but you’ll need a high tolerance for teenage bullshit (and teenage Spotify playlists) to get through it.

Let’s get this out of the way: Unfriended is about a killer Skype call. In fact, the entire movie is one long video call (with a few plot-driven visits to Facebook, YouTube and Spotify) held by a group of irritating teenagers you wouldn’t want to spend two minutes with, never mind an hour and a half.

It’s probably the first all-webcam theatrical release, after Joe Swanberg’s similar short in the original V/H/S anthology and Maisie Williams’ Cyberbully on C4. And it won’t be the last.

Unfriended does a bang-up job of exposing the casual cruelties of millennials’ social networking. A group of Breakfast Club-y high-school stereotypes are group chatting together when they notice a rogue profile has joined them – someone has hacked the profile of their deceased friend, a classmate who killed herself after one of them uploaded an embarrassing video of her online. But ghosts don’t use Skype – do they? That’s what our screamy teens have to figure out, as they’re offed, one by one, in messy on-screen splatter sequences.

While computer screen storytelling is utilized effectively, it seems like rather a waste of a cinema screen. Unfriended will make much more sense when watched on a computer, being the self-same place where the film unfolds; watching a screen on a screen mostly serves to highlight just how insular yet distracting modern life has become. Still, even with obnoxious characters and buffering clips, Unfriended delivers a classic narrative in a modern way.

It’ll be hopelessly dated in a few months but, for now, it’s a mean-spirited slasher that feels fresh and raw.

The all-Skype gimmick that drives this very modern horror is effective but you’ll need a high tolerance for teenage bullshit (and teenage Spotify playlists) to get through it.