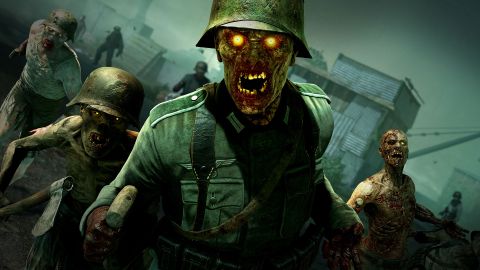 In its self-aware campiness and macabre action, there is a contagious confidence in Zombie Army 4 that will leave anyone who plays it a fan of this exciting co-op shooter.

Zoom out enough from the modern games industry and the slate of recent games can seem sort of binary; some games are about moments, like defying death and boss battles and saving the world, and others are about feelings, like melancholy and grief and hope. Zombie Army 4: Dead War paradoxically fits into both and neither at once. It has plenty of set pieces for you and your team to star in and it’s certainly evocative in its relentless pacing of undead hordes, but it’s also a game much simpler than any of that. Zombie Army 4 is a game about shooting nazi zombies with friends, and so long as you’re not completely worn of that well-trodden concept, it’s definitely worth enlisting.

I’ve been dying to Reich you

If you’re wondering where the first three Zombie Army games went, you’re probably not alone. Rebellion’s undead Sniper Elite spinoffs began years ago on PC before a new third game was packaged with the first two and launched for all platforms back in 2015 as Zombie Army Trilogy. The trio didn’t make a lot of noise critically and playing Zombie Army 4 feels like the true debut for the series as it’s now fully fleshed out and distances itself from its roots as something closer to a mod than a new series. As a third-person Nazi zombie shooter, no-one would suggest Zombie Army 4 is a novel concept – even its years-old debut already followed a long line of games depicting a similar world, but its merits exist beyond its story setup.

To care about the story in Zombie Army 4 is misguided, and generally feels like more effort than the dev team expects of you. Zombie Army 4 can and likely will be played out of sequence when you’re jumping into its nine hour-long (or longer) levels because the nature of its matchmaking system doesn’t seem to prioritize where you left off. Ultimately the game survives this disarray because most of its mechanics work well and it’s paced relentlessly, not to mention it benefits from the almost unanimously true adage of “everything’s better in co-op”.

Co-op in Zombie Army 4 supports up to four players and you're able to customize your heroes with a wide range of options. Cosmetic changes are there for the fashionable fascist-bashers, but more important are the many ways to focus your play style to your liking. Every weapon has its own upgrade tree, every perk has three tiers of improved abilities, and loadouts come with a range of options for players who stick around to unlock more slots and strengthen their zombie-killing heroes. This system runs as deep – if not deeper – than any I’ve seen in the genre, and it’s all displayed so clearly that you’ll always know exactly what to do to improve. In turn, it gets addictive early and remains that way for the whole game.

Customization extends beyond how you play and into what you play. Though the same nine levels plus a horde mode are there for everyone, you can customize how dense the hordes are, what chapter of each level you jump into, and the level of difficulty to fully control each session. Want to fight off a horde meant for four players in a solo lobby? Go for it. Want to make your two-player game sparser but extremely difficult? That works too. Want to play just the wild finales of every level? No worries. There’s a ton of flexibility and what’s even greater is the game doesn’t seem to care how you do it. You’ll still record your scores, earn your precious XP, and even unlock achievements and trophies where applicable. Sure, the XP rewards may be greater on higher difficulties, but playing Zombie Army 4 with an intensity no higher than you’re comfortable with doesn’t mean you miss out on the game’s deep list of unlockables.

Riding into WW2 on a synthwave

All of that catering leaves you to focus on having fun with your friends while slaying the undead, including an impressive array of special types, by the hundreds in every chapter, and explore the game’s weird and wonderful campaign. After seeming adequately hinged in the opening level’s train station, the story brings players to several absurd landing spots like a would-be love cruise down the canals of Venice, an abandoned zoo, and a research laboratory, because no game this gleefully schlocky would be complete without a phony science experiment playing host to amped-up super zombies.

That’s the thing about Zombie Army 4. Though it depicts an alternate history view of World War 2, it does so through very 80s-tinted glasses. Its synth-heavy soundtrack, over-the-top storyline, and era-appropriate monster movie posters decorating each loading screen all sell the game’s promise of a campy, gory horror show we’ve all caught at some weird hour on a channel we didn’t know we were paying for – or these days, buried in our streaming library. Zombie Army 4 revels in its world of darkly magical, limb-severing, unabashed genre tropes. It hopes you’ll take a seat on its crazy train. I did, and I loved it as a result.

That’s not to say the hordes always fall the way they’re supposed to. More literally, the game’s way of spawning in more undead can sometimes lead to frustrations, as you’ll bear witness to them materializing right before your eyes. For such a fast-paced game where you’re constantly doing crowd control damage to the masses of shamblers surrounding you, it feels unfair to turn some corners and watch as the game places more zombies right in front of you. Undoubtedly a bug Rebellion will look to fix, it makes for a slightly lesser experience.

In the same vein but seen much more commonly is a nagging issue with movement controls. Specifically, the stomp mechanic, meant to part re-dead corpses from their precious ammo, health, and other items, almost never works the first time. Sometimes it even takes many tries – upwards of four or more – before the game will finally register what you’re doing and grant you the intestine-tangled tools. Again, Zombie Army 4 is much too busy to slow players unfairly in this way. If I’ve got a fast-closing exit out of the way of an onslaught and I’m slowed by a faulty stomp button and subsequently hit a game over screen as a result, that leaves a sour taste, and that can happen a lot in Zombie Army 4 until you learn not to rely on the stomp move, or until Rebellion fixes it. Whichever comes first.

Even general movement feels just a bit off, to an extent I don’t remember Rebellion’s other quite iterative line of shooters having suffered from. I’m not sure how it got a bit worse for the company’s newest game, and unlike those issues above, I don’t suspect this one is a problem able to be patched, so be prepared to occasionally overrun some ammo boxes or push up against a door frame. Honestly, you’ll get used to it, but it’s too bad you’ll have to.

Those polishing issues aside, I really can’t fault Zombie Army 4 for anything else noteworthy. It delivers a consistently fun and frenzied co-op shooter with plenty of ways to play and even more to keep you coming back. I’ve avoided using the name until now, but I’ll just say it; if you like Left 4 Dead, this isn’t trying to be the near spiritual successor as much as other recent games have, but it certainly shares enough DNA to earn many of the same fans. Zombie Army 4: Dead War is usually silly and rarely restrained. Enlist a few friends for this war. It’s well worth fighting.

In its self-aware campiness and macabre action, there is a contagious confidence in Zombie Army 4 that will leave anyone who plays it a fan of this exciting co-op shooter.