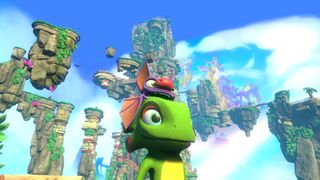 Yooka-Laylee is out this week, and while it’s a flawed – and barnstormingly divisive – game, if you’re heavily invested in the idea of the Banjo-Kazooie team making a new, Nintendo 64-style platformer, and can look past a fair amount of clumsiness and irritation, you might well be about to start playing it. And if you are, there are a few things you’re going to need to know.

Having sunk over 20 hours into the game to review it, I am now very familiar with Yooka-Laylee’s systems, quirks, and conundrums. And with the game’s distinctly 1998 design conceits throwing up more than a few curveballs over the course of its run, I feel it my moral obligation to straighten out a few things, in order to make your experience as clear and hassle-free as possible. Read on, and I shall pre-emptively assist you.

Seriously. The battle against Rampo in the expanded version of the first world is an exercise in throwing yourself against a brick wall (or more accurately a stone slope). Until, that is, you’re better equipped with higher level abilities. The gist is that you need to roll up the slope toward Rampo, weaving between the various patterns of logs he throws down at you, before avoiding his fire breath at the top and bashing his teeth in with your spin attack. It is, however, a rather frustratingly crap battle, given that while the first ascent is tricky, Rampo then immediately blows you back down to the bottom for two more goes. And the log sequences get harder every time, until the last one becomes flat impossible.

The strategy? Leave him there until late in the game. When you hit World 5, you’ll pick up the power of flight, whereupon you’ll be able to veto the whole battle by simply skipping to the top and smashing Rampo’s big smug face in. Fighting him by this method might technically take longer by a good 10 to 12 hours, but in terms of wasted time, it’s a hell of a saving.

If an objective seems impossible, it probably is. Come back later

Bouncing straight off the last tip, one of the things Yooka-Laylee is really bad at communicating is when you need a special ability in order to complete a challenge. It’s entirely happy to let you repeatedly try to find increasingly arcane ways of completing tasks or passing obstacles, when the actual fact is that you might need a certain power – maybe even one you don’t yet know exists – in order to get anywhere. So yeah, try things out, but if you find your methods becoming increasingly abstract in the face of a lengthy bout of zero progress, forget it and do something else. There’s probably a power that will sort things out for you in no time, once you have it. But at the same time…

Be aware of the bum-laser

Probably the weirdest tertiary use for a power is the bum-laser. Long-story short – when you use the invisibility ability, manoeuvre into a patch of concentrated light or the path of a laser, and then crouch, you’ll refract a beam through your body and out of your shiny, previously-green ass. And then, if you turn on the spot, you’ll be able to redirect the beam for various purposes, such as melting ice and activating switches.

No, you're right, none of this is instinctive, and depending on which challenge you first encounter that uses the technique, you could well be entirely confounded for a good long time if you don’t know how it works. So I’m telling you right now. Be aware of the bum-laser. It’s weird, but it works.

Don't worry too much about your power bar

Many of your special abilities are technically rationed off by your power bar (which can be extended as you work your way through the game), and you can use the many butterflies that are dotted around the game to replenish it. My advice? Don’t bother about this too much, and use the butterflies to recover your health instead. Your power bar will regenerate automatically after a little while, and most abilities run it down so slowly that you’ll very, very rarely need to manage it manually.

A couple of late-game objectives will shamelessly burn it down as part of the challenge, but they’ll usually leave a few butterflies scattered around the rough vicinity to help you keep going. If they don’t, well, I’m afraid there’s not much you can do about that but wait for a regen. Yooka-Laylee’s challenges aren’t always the best designed.

Unlock the abilities in order

Theoretically you can unlock the additional abilities in roughly any order you like, with only slight gating by way of additional sets appearing in the shop at a couple of stages of progression through the hub. That said, it’s worth picking them up in order. Their necessity in challenges crops up in the same rough sequence they appear in the shop, as does the facility to use them to explore new areas of the main hub. If you want to keep things as straightforward as can be, grab the upgrades as they become available, and it’ll all loosely make sense.

Play Coins are usually near the arcade

Every game World has an arcade machine, manned by Rextro, the low-polygon dinosaur. You’ll have two chances to win a Pagie from each one – one for winning the game at hand, one for beating the high score – but to start you’ll need that World’s Play Coin. These are hidden somewhere in the level, but what the game doesn’t tell you is that they’re always closely in the vicinity of the arcade machine. Don’t go wandering off on a lengthy search. Just potter around nearby – making sure to check for hidden routes above and below – and it’ll turn up sooner than you might expect.

Keep an eye on your collectible totals

Although they don’t appear on-screen during normal play, if you hit the pause menu you can view all of your current collectible totals, as an overall number and broken down World by World. You want to get familiar with these numbers. The reason? Throughout your exploration of the hub, you’ll run into trivia quizzes that halt your progress until you win.

Their questions are always based on in-game facts and knowledge, and at some point they’ll almost definitely ask you about your Pagies, Quills, and total play-time. Make sure you know this stuff, because the win conditions for these quizzes can be tight, and you really, really do not want to have to restart because of a random question about an arbitrary, ever-changing number. The most important point to note? These quizzes lock out your pause menu, meaning that you can't check these answers on the go. Know before you start, or you're looking at a lot of trial-and-error guessing.