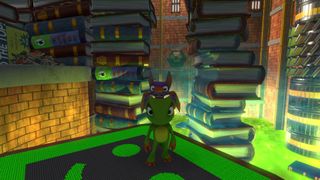 After a long wait - 17 years, if you started counting after the Nintendo 64 release of Banjo-Tooie - Playtonic's Yooka-Laylee has finally arrived to recreate the lost age of late '90s 3D platforming. And, coming from a studio made of veterans of Rare (the most stalwart western proponent of the genre, as well as the most belligerently, whimsically British), it should come as no surprise that the game is filled with Easter eggs, both retro themed and often decidedly cheeky.

Here are the best six we've found so far. Warning: Impassioned fans of Xbox motion control might want to look away now.

One of the earliest Easter eggs in the game is one of the last you'll be able to get a proper look at, due to it being attached to a boss fight that will resolutely crush your dreams until you return with late-game abilities. Once you've felled World one's Rampo, a close look will show you that his stony exterior isn't decorated with mere random, rocky wobbles, but rough etchings of retro game controllers. Squint a bit, and you can make out a Mega Drive / Genesis controller and a SNES pad in the central stone above.

Yooka-Laylee isn't above mocking its own characters. In fact it does it constantly. Case in point: The acronym of Trowzer's power-up business - 'Twit' - which may also be a sly (but slightly cleaner) nod to Trotter's Independent Traders from classic British sitcom Only Fools and Horses.

See also, the initials of Rextro's retro video game arcade business. It could just be a coincidence, mind, but then it could also very deliberately say 'Arse'.

These enemies are interesting. One of the most irritating in the game, they patrol back and forth, scanning the area in front of them with a three-dimensional green laser grid, before tracking your body movement to shoot you with twin death-rays from their two eye lenses. Almost like an overtly malicious version of a certain camera-based, Microsoft motion controller that Rare used to develop games for. Again though, could be a total coincidence.

Except that actually, in-game, these things - which also come in boss form - are called INEPTs. So, er, yeah, almost definitely not a coincidence.

The Ghost of Karta, anyone? Yeah, the name of Yooka-Laylee's recurring minecart character is almost definitely a nod to God of War.

And speaking of characters from other series, the title of this financial advice tome - Jetpacks and Butlers, which can be found in the Archive area - is a clear shout to elder Rare adventure Conker's Bad Fur Day, referencing the aspirational purchases mentioned in one of the squirrel protagonist's money collection quotes from that game.