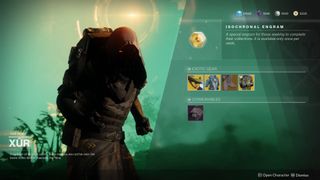 Destiny 2: Forsaken added a bunch of cool Exotic weapons and armor, but it also made Exotics much harder to get, so many players still haven't been able to play with some of those cool Exotics. For months, players have asked Bungie to update the inventory of Exotic merchant Xur to include the new Exotics in order to make them more accessible, and the studio's finally doing just that. As community manager dmg04 confirmed in a recent Reddit comment, the massive update coming on March 5 with the launch of Destiny 2 Season of the Drifter will add Forsaken Exotics to Xur's inventory.

"Patch note preview: Xur will be updated to offer Forsaken Exotics in the update next week," dmg04 said. "Note: Fated Engrams WILL NOT offer Forsaken Exotics. This will be looked at for a future update. Additionally, Xur is still the snake-faced bastard you remember from Destiny 1. He'll still have a rotation of items from various releases, meaning he won't always sell a Forsaken exotic. The team is also looking at the perks that can roll on armor pieces, to make his weekly stock a bit more exciting."

Fated Engrams, you'll recall, are the special engrams that can only be purchased from Xur once per week. These always yield year-one Exotics that you don't already own, so they're basically collection fixers. Unlike Fated Engrams, Xur's incoming selection of Forsaken Exotics will be totally random, so you won't always get something new or something you want. That said, potentially getting something from the Forsaken pool is still better than another season of old Exotics. Now, if we can just talk Xur into putting enhanced perks on his Exotic armor…

Speaking of highly requested changes: the big March update will also rework Gambit in response to heaps of player feedback.