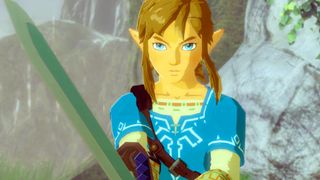 Even before its reveal, the Nintendo Switch felt like it had to be a console with a singular purpose. It was to be the machine to unify Nintendo’s split hardware platforms – the consistently barnstorming handheld wing, and the increasingly limp-footed home consoles – into a single, successful entity, that could be served with a solid stream of games regardless of the company’s lack of latter-era third-party support.

Hardware-wise, Nintendo has already delivered the best possible version of that ideal. The Switch is a delight to use, robust enough in its physical form as to feel like a premium console when used in any of its various formulations. And it’s clearly powerful enough to deliver cutting edge, complex, entirely modern game experiences, based on the evidence of The Legend of Zelda: Breath of the Wild alone. Channeling a uniquely Nintendo design sensibility of tactility, inviting ergonomics, and consistently fun ease-of-use, the Switch hardware just works. Really, really well. It delivers everything it had to.

Not only that, but it does so while conspicuously doing what Nintendo has rarely done before. Learned from its own mistakes.This is very significant and very heartening, because a stick-in-the-mud mentality - a seeming refusal to meet the modern industry halfway - has long been the cause of Nintendo’s home console woes. Ever since the Nintendo 64, in fact. Technically progressive in a great many ways, Nintendo’s refusal to accept optical storage in its first 3D machine directly caused the start of the slip in third-party goodwill. The Gamecube conceded to discs, but used a proprietary Nintendo version, with a smaller capacity than PS2 and Xbox DVDs. Then of course, came the Wii. Previous-gen horsepower, and an obsession with proprietary motion control. And then there was the Wii U, which had all the same problems in addition to just not selling.

The Switch though? Its unique features are there to facilitate playing in different places, not dictate playing in different ways. There are no hoops to jump through, for players or developers. But at the same time as wising up in terms of how to really connect with interesting but inviting hardware – or, perhaps more accurately, remembering how it always used to do it – Nintendo very strongly looks to be striking the same balance with software. And here’s where it’s learning from other people’s mistakes. Namely, Sony’s.

The reason that Nintendo’s handhelds – from the Game Boy to the New 3DS – have always done well is that Nintendo has always understood the differences in the cultures of home and portable gaming. Home machines need big, glossy, detailed, expansive games. Handhelds? Well, you launch that empire with Tetris. And on the inverse, a lack of this understanding is precisely why rival handhelds have failed. Both the PSP and Vita launched with the intent of using horsepower above and beyond the portable standard to deliver the full, AAA experience on the move. But it turned out that few people actually wanted that. As decent a recreation of the ‘big’ console series as Uncharted: Golden Abyss might have been, ultimately it wasn’t a great fit for playing on the bus, and was rendered rather pointless by the existence of three better, full-sized Uncharteds  already existing on the PS3.

Later, Sony realised it error, but alas it realised too late. The latter years of the Vita’s life were defined by an indie goldrush, as Sony charged forth to sign as many interesting, smaller games as possible, using the resurging independent game dev scene as fuel. Suddenly there was a huge, untapped source of handheld-friendly games, requiring little internal development resource on Sony’s part. The Vita, with just a few exclusivity deals and the odd development funding incentive, could have the library it had always really needed. Unfortunately, the damage was done by that point. While the Vita’s last couple of years delivered a great machine with a healthy sense of purpose, sales momentum had been hit too hard during its early, stumbling days to properly recover, at least in comparison to the massive sales enjoyed by the 3DS.

And it seems that Nintendo was paying attention. Because while some (myself included) initially worried about the Switch’s apparently spartan launch window, dominated as it seemed by Zelda and little else of comparable heft, Nintendo’s later indie showcase suddenly made the bigger picture very clear. Rather than simply using the unified platform to effectively double its own development resources, Nintendo is rallying exciting indie devs with exciting projects toward what will, in a year or so, be the dominant (if not only) handheld games console in the market. Indie devs whose games are a perfect cultural fit. Indie devs who are more likely to be Nintendo-friendly in a business sense too, due to their lower overheads, largely non-physical sales model, and non-reliance on either the PS4’s full processing power, or its full install-base in terms of sales and profitability.

As well as being a natural fit in terms of both handheld ideals and development models, this, crucially, is also a strategy that can work right out of the blocks. Projects like these, and their developers, don’t need to wait until a huge number of players have committed to a console before they commit to production, which goes some way to breaking the catch-22 of ‘games mean hardware sales, hardware sales mean games’ that challenges any console during its launch period. In short, the Switch can hit the kind of eclectic momentum the Vita was eventually building toward, and do so within its first few months, effectively covering the ‘handheld’ side of the console’s identity off the bat, without any great resource burden on Nintendo.

That in hand – and with momentum only likely to build if Nintendo continues to snag the kind of exclusivity and special edition deals it’s opening with – bespoke, first-party developed games of every shape and size can enjoy a great deal less pressure than on recent Nintendo home machines, dropping into an already healthy ecosystem rather than having to prop up the whole damn thing. And with the first salvo of those first-party games starting with a vast, intricate, immaculately crafted Zelda that can easily go toe-to-toe with any major open-world action game available on rival consoles, a Splatoon 2 beta coming this very week, and the first real, progressive, core Mario game in seven years on the way – not to mention inevitable E3 announcements in June – the Switch already feels like the healthiest and most smartly managed Nintendo console in generations.

And the cherry? By embracing and promoting contemporary indie devs as readily as it is, the Switch is already aligning itself with the kind of enigmatic, left-of-centre game design that the core Nintendo fanbase has always valued, but importantly, without pandering to an exclusive audience bubble. There are already obvious allusions to specific past glories, in the likes of Fast RMX (F-Zero GX2 in all but name) and the Blaster Master sequel, but sitting alongside creative new ideas like Snipperclips and Snake Pass, they create the impression of a console intent on serving Nintendo nostalgia well without being beholden to it.

It feels like after years of trying too hard to stand apart, Nintendo has finally found the right balance of making its point of difference work as an asset, without smothering itself with divisive otherness. That it has done so with such exciting clarity and insight, across hardware and games in unison, makes the Switch feel like the return of the creative, progressive, yet strategically sober Nintendo that was such a consistently vital force during its heyday. And, as anyone who remembers the pre-Wii days can tell you, that can only be a good thing for gaming in general, whether you ever pick up a Switch or not.