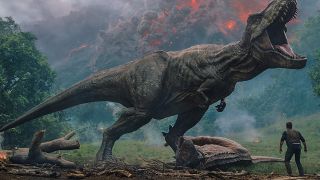 The Jurassic Park movies have always been on the scarier side of family entertainment. How many kids were scarred for life by Dennis Nedry’s death by Dilophosaurus in the original film? Not just me then…

That Fallen Kingdom is shaping up to be the scariest Jurassic movie yet, shouldn’t really be a surprise, given that director J.A. Bayona is at the helm this time, given his previous form with The Orphanage, The Impossible, and A Monster Calls.

Bayona was picked for the job by writer/producer and franchise-overseer Colin Trevorrow, who directed Jurassic World and will return for the untitled JW3 in 2021. As Trevorrow explains in the new issue of our sister title Total Film magazine: “I felt different voices are crucial to keeping it fresh and entertaining. What we have concocted here is something that not every filmmaker can pull off.”

When the first Fallen Kingdom trailer dropped and people were worried it was too spoilery, Trevorrow was quick to reassure that only footage from the first 57 minutes had been included. Yes, the film will go epic with the volcano that’s about to erupt on Isla Nublar and make its dinosaur inhabitants extinct, their will be a sharp left turn in the second half where it will become more contained, suspenseful, and, yep, scarier. It might sound a bit like the premise of The Lost World to begin with, but at about the halfway point, Trevorrow promises it goes in “a sharply different direction, and it does not turn back.”

Check out these exclusive images from Fallen Kingdom:

Bayona cites films such as 1979’s Dracula and Hitchcock classics as influences on his gothic, suspense-filled take, and even had a deal with the actor’s where he’d try to catch them off-guard during takes to up the authenticity of the scares. “I’m dying to see the movie with an audience, because definitely, we are betting for it to be more scary than ever,” Bayona tells TF. “But let’s see what happens when we show the movie.”

Star Bryce Dallas Howard, who returns as Claire, puts it a little more bluntly. “You can imagine what [J.A.’s] version of this movie is going to be, because he is just really good at scaring the shit out of you, and doing it in a way that’s emotionally rooted,” she says. “It’s connected to character, as opposed to connected to the jump scares.”

For much more on Jurassic World: Fallen Kingdom, pick up a copy of the new issue of Total Film magazine, when it hits shelves on Friday, May 4. It’s a Jurassic bonanza, featuring a special supplement on 25 years of the definitive dinosaur movies, a Fallen Kingdom art card and a How It Works: Dinosaurs ebook. There's also an exclusive 'roaring' cover to be found at select Sainsbury's stores in the UK.

Visit My Favourite Magazines to take advantage of our latest subscription offer, where you can get Dr. Ian Malcolm and T-rex Funko Pop! Figures when you subscribe to a bundle of six months of print or print and digital Total Film (ts and cs apply).

Jurassic World: Fallen Kingdom hits UK cinemas on June 6, before opening in the US on June 22.