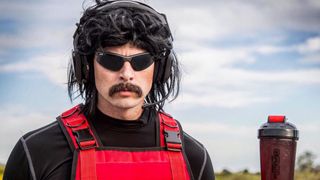 Who is Dr DisRespect? It's a question that not even some of his longest subscribers can answer, as the man behind the mask rarely, if ever, shows his true face. He's often talked about thanks to being the subject of plenty of controversy and his tendency to overplay his character, so we've got the details on exactly who Dr DisRespect is and why you may be reading about him in the news elsewhere.

Who is Dr DisRespect? Everything there is to know about the so-called "two-time champion"

Dr DisRespect's real name is Guy Beahm though you'll rarely, if ever, see him go by that online. Also known as The Doc, he started out as a YouTuber in January 2010, creating videos on Call of Duty: Modern Warfare 2. Eventually, he was hired by Sledgehammer Games as their community manager, before accepting a position as a level designer, at which point he put his YouTube career on hiatus.

Beahm was responsible for designing a number of maps in Call of Duty: Advanced Warfare but just under a year after the game came out, he resigned from his role at Sledgehammer in order to return to his career as an influencer.

As a streamer on Twitch, Dr DisRespect plays a variety of games, but mainly focuses on shooters. Due to his history with the franchise, Call of Duty is one of his most played games, alongside titles like PUBG, Fortnite, Ring of Elysium, Escape From Tarkov, and Apex Legends.

"I created a character who plays multiplayer video games, and he's considered the most dominating gaming specimen," is a quote from Beahm, referencing the fact that Dr DisRespect is known as the "two-time 1993-94 blockbuster video game champion". It's worth noting that award is entirely fictional and simply part of his act.

His motto is "Violence. Speed. Momentum." and when playing the character, Beahm wears a black mullet wig, reflective shades, black headphones, and a black leather vest top. He also has a moustache he has affectionately named the "Poisonous Ethiopian Caterpillar".

December 2017: Beahm took a two month hiatus from streaming after admitting live that he'd been unfaithful to his wife. The break was so he could "take time to focus on his family".

September 2018: While streaming Call of Duty: Black Ops 4, Beahm's home in Encinitas, California was shot at. He went off camera then returned, no longer in disguise and explained that this was the second time in two days someone had shot at his house so he had to end the stream early.

June 2019: During E3 2019, Beahm had a cameraman following him around, live streaming his experience. He followed him inside the male bathrooms at the event while continuing to stream, which is against convention rules. He was subsequently suspended from Twitch and his E3 badge was revoked. Two weeks later, his Twitch channel was reinstated.

July 2019: He lashed out on Twitter at Kotaku journalists Jason Schreier and Nathan Grayson after the latter reported on the previous incident during E3 2019.

August 2019: Musician Jimmy Wong called out Dr DisRespect for being outwardly racist on stream, performing caricatures of Chinese accents. Beahm retorted by saying that some of his "best friends are Asian".